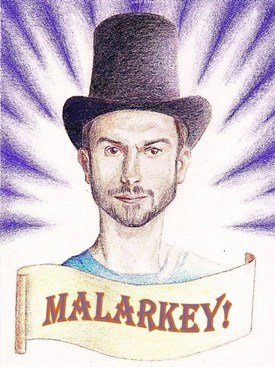 I will be very brief, because Malarkey is very brief. It is one of those comedy sketch shows that is so tight, all is complete within the right side of 30 minutes to fit in with the thousands of shows in this year’s Edinburgh Festival, where it heads to following a brief run as part of the Camden Fringe.

We start with a garbled introduction from a nervous Iain Gibbons, or rather Iain Gibbons playing the part of a nervous character. The introduction becomes more nonsensical as it progresses, such that ‘gentlemen’ is misspoken as ‘German men’, for instance. The sketch thus becomes increasingly hilarious as the hapless host realises the error, which only compounds his nervousness, which leads to further errors, and so on.

There is a good variety of sketches – and I must resist the temptation to detail them all – with a warm, non-threatening level of interaction with the audience. The strength in Gibbons’ performance is not so much in the words but in the acting. There is a hilarious scene when he attempts to read today’s newspaper, but his right hand, still sticky because of events in the previous sketch, sticks to the front page. Eventually he resorts to reading half of each page, with his left hand tearing the paper with each page turn; he only reads the latter half of Cilla Black’s obituary.

It is, with the benefit of hindsight, quite remarkable that so much was packed into 25 minutes, including ballet and a raunchy dance routine – and if the introduction was garbled, the final scene is completely indecipherable. It left me in hysterics.

It is with considerable regret that the show was not at least a little longer, as we reach the ‘… and finally’ sketch only just as we are settling into the show. That said, it is always better to leave your audience wanting it to be 20 minutes longer than to leave them thinking your show was 20 minutes too long. At least all of it was actually rather funny. A promising start from Iain Gibbons: I do hope there’s more to come of the same quality.

Influenced by the silent comedians, Monty Python and Rowan Atkinson, Iain works primarily as a character actor, having performed for theatre and independent films. Prior to his training in Paris at Ecole Phillipe Gaulier, Iain spent six years in Cardiff practicing the techniques of Strasberg, Meisner, Lecoq and Meyerhold, but last year was supported by the Arts Council of Wales to train with Philippe Gaulier at his Paris school. While in Cardiff Iain trained with Denni Dennis Company Clowns, Royal Welsh College of Music & Drama, Glamorgan University’s Cardiff School and Cultural Industries, worked with and participated in workshops with theatre companies including Spymonkey, Complicite, John Wright, Frantic Assembly, Cardboard Citizen and No Fit State Circus.

It is 2002 – another Royal Jubilee year, and HRH (Mary Roscoe) is due to open a new Science wing in a 'sink' comprehensive where Dr Derek Jones … END_OF_DOCUMENT_TOKEN_TO_BE_REPLACED

Dr Anna LaRosa (Dr Stefania Licari) has a lot to say. Just as well, as she’s the only one on stage in this medical comedy, which largely draws its … END_OF_DOCUMENT_TOKEN_TO_BE_REPLACED

Nikhil Parmar’s one-man show, originally written as a TV pilot, manages to touch on a wide range of themes from Islamophobia to modern fatherhood with … END_OF_DOCUMENT_TOKEN_TO_BE_REPLACED

Handel’s 1738 opera Serse (or Xerxes) is an exploration of power, love and human frailty. King Serse falls in love with the voice of his brother … END_OF_DOCUMENT_TOKEN_TO_BE_REPLACED

Lea Salonga has her fans. She also has some superfans, the ones who yell, “I love you Lea!” at almost every opportunity. If that wasn’t enough, there … END_OF_DOCUMENT_TOKEN_TO_BE_REPLACED