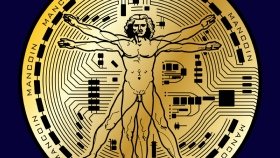 As you enter the Studio Space at The Vaults, three girls dressed all in black are arranging things on desks, writing on a flipchart, talking to each other and taking the occasional swig of whisky. Then a young man in a suit enters, addresses the audience as if it’s a lecture and informs us that he’s Guy White (geddit?) and he’s “one of the good guys”.

Guy’s into cryptocurrency and is trying to raise the money for the next big idea “W0ke” (sic) but it’s all falling apart as is his relationship with Polly his girlfriend. Then by accident whilst drunk, he comes up with an idea for a cryptocurrency that’s earnt by doing good deeds. It’s really just a PR stunt but overnight he’s made $87million and his life will never be the same.

Mancoin is a very funny satire about gender politics, white male privilege, cryptocurrency (does anyone know how this works?), how hard it is to be a man in this #Metoo world where it’s really difficult to know whether he’s being politically correct or not and it punctures the righteous importance of the self-enlightened modern man of which Guy thinks he’s one. As he says, “It’s impossible to be a man these days as the world is against us”. It’s also an attack on techno-entrepreneurs who seem to enrich themselves without enriching the world around them.

Mancoin is an excellent piece of work from writer Felix Legge, deftly directed by Anna Fox. It’s subtle and broad which is a hard trick to pull off in less than sixty minutes but it does it superbly. Hubert Burton (fresh from his role in “Inheritance”) is superb as Guy in what is basically a monologue. We listen to his pitch about making the world a better place – he is after all “one of the good guys” but as it all unravels, we feel sympathy for someone we probably shouldn’t – and that’s down to Burton’s very funny performance – we really do like him. What stops the piece from being a static, monologue is the use of the three girls (or should that be women or actors or actresses – it’s tough for a man to know these days) who take turns playing Polly, echoing her words as Guy speaks them too; they also play all the other characters. This is a clever device that really works well and Shazia Nicholls, Suzie Preece and Gabby Wong are all excellent as they move around the stage giving another dimension to this already very interesting piece of theatre. There’s also some video projection and clever lighting that helps give Mancoin another layer of interest.

The Vault Festival is rightly praised for putting on original, exciting and innovative work and Mancoin is definitely all of those. It deserves to be seen by as many people as possible so get down to The Vaults in Waterloo before February 10th – you won’t be disappointed.

Guy White is woke as hell. He wants more women in tech, he thinks Bond should be black and he always goes down. He’s got a cryptocurrency called woke which rewards people for socially conscious acts and it’s going to change the world.

But his dream investors have other ideas and when things stop going Guy’s way, he suddenly finds it’s the beast within that gets woke.

Mancoin is a darkly comic play that asks: in a world that’s finally catching up, is it really possible to be a good man when you’re, well… a man?