For those who don’t know, MARIO is the title character of the bestselling video game franchise of all time, which began in 1983. These days he is an established Pop Culture Icon and has appeared in a variety of merchandise: people and places have been nicknamed after him. MARIO – A SUPER MUSICAL, presently showing at the Union Theatre, London, is a highly successful parody of the Mario universe, and hugely appreciated by the audience who all appeared to have a thorough knowledge of Mario and his exploits and therefore found Jim Burrows’ witty script very amusing. 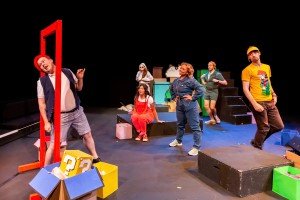 The show, at 70 minutes, is just the right length and is played by the highly talented cast with unbounded energy as well as a full understanding of the style required. It is very much an ensemble piece and it would be invidious to single out one name from the others. All of Billie Kerr, James Hastings, Kieran Sims, Caitlin Swainton, Jessica Lim and Sam McCallum play a multitude of roles and work smoothly as a team. Not only is their dancing impressive but they can all sing powerfully and have as much fun with the material as is possible.

They are greatly aided by the director, Ellie Coote, who has ensured that the piece bowls along at breakneck speed and that the seventy minutes fly by. Choreography, by Laura Dawn Pyatt, is athletic and has been slickly rehearsed, ensuring that the small amount of dialogue flows seamlessly into the next song…

… which brings me to what I think is the highlight of this new musical: the music! So often in a new musical the songs let down the whole concept: not here! They are catchy, always appropriate to the lyrics, easy on the ear and use a wide variety of musical styles. Winston Eade, the composer, must be warmly congratulated on the high standard of his score – I hope we hear much more of him! He is aided and abetted by Laurence Stannard who conjures all sorts of sounds from his laptop and keyboard.

The budget set design (uncredited) is wholly appropriate to the whole concept as is the lighting and sound design of Carey Chomsoonthorn and Matthew Karmios.

What is MARIO – A SUPER MUSICAL about? Well, it starts when the red-suited moustachioed plumber (Rob J Wrimus) goes missing and the Princess has to give up her role of Damsel in Distress and search for him! To say any more would be to spoil it for you…

A highly enjoyable show with great songs – highly recommended to all Mario fans!

After a 5 Star, sell-out run at The Cockpit Theatre last month, Mario is extending his stay on the stage at The Union Theatre this September! With book and lyrics by Jim Burrows & music by Winston Eade. Direction by Ellie Coote, Musical Direction by Laurence T-Stannard & Choreography by Laura Dawn.

When the red-suited moustachioed plumber goes missing, the Princess realises she has to break the cycle of her role as “damsel in distress”, turn the tables and go on an adventure to rescue her rescuer. Together with his cowardly brother, her officious butler and an embittered, drunken former sidekick, they have to learn what it means to be a hero to defeat the evil dinosaur King and his scheming witch minion.

This new musical parody features an electrifying original score, bringing the much-loved characters of the Mario Universe to life! This show is a must-see for Mario lovers from all generations as we go on a new quest where the clock is ticking down and the fate of the virtual world is at stake – will it be mission complete or game over?

Britain, so a London cab driver once told me, is obsessed with the Second World War, as though it happened just recently. Power Luncheon would seem, … END_OF_DOCUMENT_TOKEN_TO_BE_REPLACED

William J Dunleavy, author and star of this monologue play, is a writer and face to watch. He enters the room (as the staging is more geared towards … END_OF_DOCUMENT_TOKEN_TO_BE_REPLACED

Cirque du Soleil’s Luzia is a joyful whirl through a psychedelic Mexico, which reminds us why live theatre is so special. Anyone who goes to … END_OF_DOCUMENT_TOKEN_TO_BE_REPLACED

I am always very excited to come across a new theatre, and Esher Theatre is a real ‘find’, conveniently situated near to Esher High Street and right … END_OF_DOCUMENT_TOKEN_TO_BE_REPLACED

Cecil Sharp is no unsung hero. Without the energy of this driven and at times prickly musician, the traditional folksong of rural England would very … END_OF_DOCUMENT_TOKEN_TO_BE_REPLACED