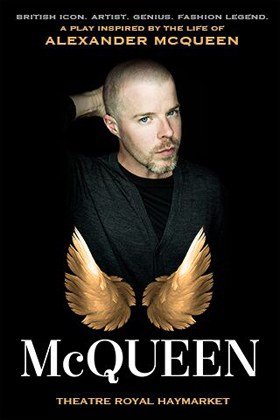 I am not, to quote the musical Sunny Afternoon, a “dedicated follower of fashion”, so I cannot vouch for the authenticity of the many costumes used in McQueen, and I am grateful to a fellow audience member who verified that the dresses and designs used throughout the play are of the style that would have been seen in an Alexander McQueen fashion parade.

Much of the choreography in this production – neither biographical nor a documentary – is highly sophisticated, and probably also takes after the ideas created by McQueen, but I found it slightly clunky and graceless in places. Perhaps this was the way it was in a McQueen show: if so, full marks to this show for its faithfulness to the original product.

The projections are simply divine. Incredibly precise and appropriate, they are so good they often threaten to overpower adequate but not altogether amazing cast performances. Occasionally, and I take no pleasure in stating this, the projections succeed in being of superior quality than the dialogue.

With the exception of a Savile Row tailor, the stoic and gentlemanly Mr Hitchcock (Michael Bertenshaw), the characters surrounding Lee (Stephen Wight) – as Alexander McQueen apparently preferred to be called by his friends, family and staff – are, as presented by the play, uncompromisingly difficult. Their language is foul and their sense of humour unimpressive. Being unfamiliar with the life and times of Alexander McQueen, I must rely on this play to inform and educate as well as entertain. Frankly, with the people around him as obnoxious as they are, it is no wonder that the talented designer ended up being taken by his own hand. In this regard, the play succeeds in eliciting sympathy for its subject.

The play is so respectful of McQueen that it ends up being a secular act of worship, and in so doing, loses some of its potential power through lack of objectivity. For instance, a scene where a journalist asks probing questions of McQueen is turned on its head and becomes an attack on journalistic intrusiveness. I had expected to come away with a greater insight into the real Alexander McQueen: all the play told me, in the end, was that this man made clothes and was a tortured perfectionist. But I already knew that much.

To be fair, Wight as Lee Alexander McQueen CBE (to give him his full name and title) is mesmerising, and does a thoroughly praiseworthy job, particularly considering what relatively little drama he has to work with. It is the models and dancers, however, who save the show: whenever they appear, it’s a breath of fresh air from the stale text. Still, my fellow theatregoer thought the whole thing was “very good”, and certainly seeing creative genius at work enacted on stage is a spectacle worth seeing.

The latest production at the intimate Finborough Theatre boasts a visually striking set designed by Sarah Beaton on a traverse stage, with the … END_OF_DOCUMENT_TOKEN_TO_BE_REPLACED

Think back. Has anyone ever said to you that looks don’t matter, its personality that counts’ Anyone that answered ‘No’ to that skip to the next … END_OF_DOCUMENT_TOKEN_TO_BE_REPLACED

A Streetcar Named Desire might just happen to be on the minds of regular theatregoers in London at the time of writing, on account of the Almeida … END_OF_DOCUMENT_TOKEN_TO_BE_REPLACED

Titus Andronicus is not usually a comedy, it is usually a bloody, villainous and vengeful tale, but tonight it is a comedy and a rather amusing one at … END_OF_DOCUMENT_TOKEN_TO_BE_REPLACED