Measured is ostensibly a play about eating disorders, and Emma O’Brien, the writer, has written the play with her own experiences of eating disorders in mind, but it feels like it’s so much more than that. I have written before that plays about mental health seem to be two a penny at the moment, and often they all start to feel very similar, but this one was different; a really unique exploration of the impacts of the illness on relationships with others which was both touching and humorous. 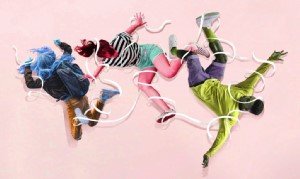 The play starts with Sophie speaking to her doctor as she is about to leave hospital, and concurrently, Lucy, her sister in the principal’s office at school after a yoghurt throwing incident. It took a couple of minutes to sort out in my head what was going on, but once I’d got there I was gripped.

The subplot about the yoghurt throwing was compelling because it was funny whilst highlighting some serious issues about life as a teenage girl in a school- casual sexual harassment by the older boys, what to do if you think a friend is self-harming, and how to get detention without your mum finding out. It bubbled in the background throughout the play, slowly but surely merging with the main plot seamlessly.

The focus though, is on the impacts of eating disorders on your relationships, in this case with your younger sister and your boyfriend. You see on all sides a mixture of grief at what has been lost, terror at the influence you may be having and anger at the fact you can’t find a way back. Tom’s story I found particularly strong as we saw the pain that he was in and the way it manifested in anger.

The acting across the board was outstanding which made me really root for the characters. I was so desperate for a happy ending. To find out whether there is one you’ll have to see the play!

Sophie’s sister, Lucy, is at that age where her friends are throwing yoghurt around at school. Sophie’s boyfriend, Tom, runs a catering company for picky wedding planners. And Sophie? Sophie has an eating disorder – which she sees as a rather large inconvenience. Now she’s in recovery, Sophie is hopeful she can reconnect with Lucy and Tom, but she knows that after hiding within her illness for so long, it’s not going to be easy to cope without it.

There’s a warm and welcoming presence about Katie Arnstein anyway, although offering a sweet to audience members as we filed in helps too. Also, the … END_OF_DOCUMENT_TOKEN_TO_BE_REPLACED

The on-stage tiling makes it feel very much like certain scenes are set in a swimming pool, which may be stating the obvious but in a performance … END_OF_DOCUMENT_TOKEN_TO_BE_REPLACED

“I am a little bit of a nerd,” smiles Joe Sellman-Leava, playing himself, or at least a version of himself he’s willing to portray to audiences at the … END_OF_DOCUMENT_TOKEN_TO_BE_REPLACED

This is the kind of show that will preach largely to the converted, if not the choir itself, although this is probably by default rather than design. … END_OF_DOCUMENT_TOKEN_TO_BE_REPLACED

Cabaret is not just the name of a highly successful musical and film, but according to my good buddies at Wikipedia is a form of theatrical … END_OF_DOCUMENT_TOKEN_TO_BE_REPLACED