It is easier for a British person to enter Sudan than it is for a Sudanese person to enter Britain, or so this production would have it. PSYCHEdelight have an entire previous production about what it is like for people wishing to seek asylum in Britain, called Welcome to the UK, a title somewhat tinged with irony, given the ‘hostile environment’ policy of the Home Office. This, however, is an entirely different story, with frustrations of a very different kind. Mohand (Mohand Hasb Alrosol Abdalrahem) is showing his friend Peter (Peter Pearson) his home village in Sudan – a very different way of life to what Peter is used to either in London or his home city, Newcastle upon Tyne. 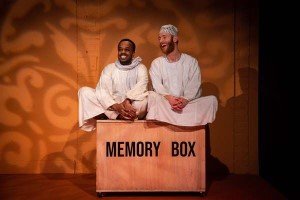 The comedy is broad and refreshing – ‘cultural appropriation’ is given short shrift, and the language barriers work both ways. With just two actors, Peter meets various members of Mohand’s family with swift costume changes, and mannerisms distinctive enough to easily tell one person from another. I’m still not sure what to make of a grandmother figure, moving about in a way I’ve never seen an older person actually move (I worked in social care during the pandemic). Other than that, the portrayals are spot on.

The production does well to harness the imaginations of the characters, and thus the imagination of the audience – getting from one side of a busy thoroughfare to the other on foot, for instance, takes more effort than pushing a button at a pelican crossing and waiting for the lights to change. A lot of sound effects are made simply by using the actors’ voices – anything from a camel to a passing ambulance. This is not, however, the stuff of ‘poor theatre’ – various props, all recognisable to the Sudanese members of the audience on press night, make an appearance for a special family occasion.

Frequent references are made to a video Mohand and Peter apparently put out on social media, which went viral and made them both recognisable faces, at least among those in Sudan that bother with social media content. But the production gives the impression Peter would have been welcomed with open arms regardless, and while economic and political factors mean there are substantial numbers of people living in poverty, Mohand and his large (by Western standards, anyway) family are well fed and watered. The show could have been considerably darker – all of the characters the audience are introduced to are still alive by the end, which, according to Sudanese accounts given after the show (which launched straight into a panel discussion immediately after curtain call), would, in reality, be unlikely.

Perhaps that’s a little like assessing the actual probability of Albert Narracott in War Horse being reunited with Joey. And anyway, Mohand and Peter would have had to make it to the end – if anything the show would be even shorter otherwise. As it is, the performances are often very physical, and the production is briskly paced, reflecting the youthful vitality of the characters as well as the need to act quickly in the face of imminent danger. Some good ad-libbing added extra sparkle to a deliberately chaotic narrative.

At various points, the audience is invited to join in proceedings, whether chanting at a rally or clapping along to party music. I hasten to add it is entirely optional. To bring a serious subject to the stage in such a fun and raucous manner, without coming across as irreverent or dismissive, is quite an achievement. An engaging and enthusiastic piece of theatre.

Mohand and Peter will travel everywhere and anywhere in the blink of an eye. These two brave clowns fight horror with laughter to bounce on one of the toughest international news stories of the decade: Mohand’s home country Sudan. As his home is facing a new dictatorship and more massacres, audiences will be taken on a road trip with Mohand and Peter jumping from one character to another, including Omar Al Bashir, Mohand’s 450 cousins, and a lazy camel.

Well, there’s a bit about Pablo Picasso’s (1881-1973) paintings in this show that bears his name. But it’s mostly about his approach towards women. … END_OF_DOCUMENT_TOKEN_TO_BE_REPLACED

It’s thirty-six years or so since Robert Harling wrote Steel Magnolias as a tribute to his diabetic sister, his mother and the group of local women … END_OF_DOCUMENT_TOKEN_TO_BE_REPLACED

Like War Horse and The Curious Incident of the Dog in the Night-Time before it, this National Theatre production centres its storyline on a boy who … END_OF_DOCUMENT_TOKEN_TO_BE_REPLACED

Did you know, The line "Nobody puts Baby in a corner." was voted as the #98 all-time favourite movie quote by the American Film Institute. I only … END_OF_DOCUMENT_TOKEN_TO_BE_REPLACED