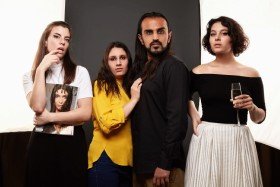 Some re-imaginings of classic works are, to be blunt, in need of further development. Others, like this adaptation of The Misanthrope, set in twenty-first century London, as opposed to the original setting of seventeenth-century France, work remarkably well, perhaps because of the play’s general focus on character development over storyline. It’s not plot-heavy, and the goading and dismissive sarcasm of Alceste (a highly convincing Sunil Patel) fits the la-de-dah environment of the fashion industry in which he finds himself.

There’s even, perhaps unusually for a misanthrope, some empathy elicited for him: the general attitude of some of his clients (or, rather, potential clients) is rather demanding and unrealistic. The sales pitch presented by Oronte (Robert McLanachan), for instance, results in an unsurprising refusal from Alceste, though rather than the ‘I’m out’ phrase used in Dragons Den, there’s more eloquence used here. Or is there? Alceste tersely opines that Oronte’s work should simply be thrown in the toilet, and despite protestations that there are many others who consider the very same work to be of good quality, Alceste’s opinion is what it is. Fair play to him, in such a fickle industry, for standing his ground.

With the retention of so much of the sort of language that would permeate a more faithful rendering of this play, it takes some getting used to. Occasionally, there is a comic effect that comes unexpectedly; Alceste’s parting words at the end of one scene, “I remain your most humble servant”, for example, are words that would be seldom said or written today. Delivered as they are here, there’s a sneering contempt that betrays the face value of the phrase.

The play does so well in a contemporary setting that it is a (pleasant) surprise that none of the characters happen to communicate by mobile telephone. When a large group is gathered on a couple of sofas, dressed informally, chatting and sipping champagne, the scene could well be something straight out of Made in Chelsea.

The cast is very much an international one. Retaining their natural accents, the dialogue overall feels authentic, rhyming couplets and poetic verses aside. The cosmopolitan nature of London living is, partly by default and partly by design, captured quite brilliantly. Some minor technicalities will, I’m sure, be ironed out as the run continues. Much as I am against unnecessary use of sound effects and background music, a scene in a ‘Trendy Club’ was devoid of any club ambience at all. This does allow for crystal clear comprehension of every line of dialogue but betrays the realism of much of the rest of this adaptation.

Good performances come from Tawny Fontana’s Celimene and Lina Cherrat’s Eliante. Celimene’s welcoming nature proves an entertaining juxtaposition to Alceste’s near-constant desire to get away from it all. A scene of theatrical brilliance is seen early on in proceedings as Alceste and Celimene manage to maintain a vigorous discussion whilst taking down and putting away an almost ridiculous amount of photography equipment – camera tripods, mirrors, screens, cables, backdrops, and so on.

And then there’s Dubois (Preslav Shipkaliev), a minor character given some verve, bringing the house down in a late scene whilst eliciting sympathy for his situation. A briskly paced performance, this adaptation of The Misanthrope takes the audience seemingly effortlessly on a journey through the various attitudes to life taken by its characters. A triumphant makeover, this is worth seeing.

Much to the horror of his friends and companions, celebrated fashion photographer Alceste holds up in his studio, and rejects the superficiality and pretension of the London fashion world.

Despite the tittering, gossip and scorn of his contemporaries, “the misanthrope” vows to stand his ground. His only problem is that he’s too damn talented and everyone wants to sleep with him!

The company that devised the critically acclaimed Shakespeare for a Camden Audience return with a radical reimagining of the classic French farce.

Did you know, The line "Nobody puts Baby in a corner." was voted as the #98 all-time favourite movie quote by the American Film Institute. I only … END_OF_DOCUMENT_TOKEN_TO_BE_REPLACED

Like The Merchant of Venice, with its profound antisemitism, and the misogynistic Taming of the Shrew, Othello is one of Shakespeare’s most … END_OF_DOCUMENT_TOKEN_TO_BE_REPLACED

If the situation in Have I None is really going to be what the future is like, I don’t want it. Sara (Abigail Stone) is cooped up at home, and the … END_OF_DOCUMENT_TOKEN_TO_BE_REPLACED

Male bonding contains seeds of sacrifice and understanding to rival any Christian religion's tenets of divine hope and compassion. And in a play about … END_OF_DOCUMENT_TOKEN_TO_BE_REPLACED