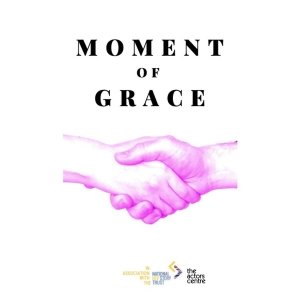 COVID-19 is not the first pandemic where the nations of the world have been proved to not really have as to how to handle it. Back in the 1980’s HIV and AIDS descended and destroyed the lives of many, many people. But, unlike COVID, AIDS also came with a stigma attached. People were terrified of catching it and people that did have it were treated as outcasts of society. And then, one day in 1987, the most famous woman in the world did something extraordinary, that started a revolution of acceptance and understanding. That event is captured in Nicky Allpress’s new film Moment of Grace, written by Ben Gosling.

Told as a series of intermingled monologues, Moment of Grace, is the story of the day Princess Diana opened the Broderip ward in the Middlesex Hospital. A fairly normal day for a royal you might think. A few handshakes, some well-chosen words, unveiling a plaque, then some nibbles and back home to the palace in time for tea. But this visit was unique in the annals of the Firm, as Diana was coming to open the UK’s first dedicated AIDS ward. Not only that, but the palace had let it be known, she would be shaking hands with AIDS patients, and wouldn’t be wearing gloves or any form of PPE.

For three people, this visit will be very significant. There is Jude (Lucy Walker-Evans) a 24-year-old nurse who, although she talks of leaving her career, really loves the job and is proud to work in the AIDS unit. Each nurse is assigned a patient and Jude’s is Andrew (Luke Dayhill). Andrew is not only living with AIDS but, he is still in the closet. His workmates think he is in a ‘normal’ ward, and his family knows nothing about him being gay and his health situation. Whilst Andrew is excited about the visit, he is also terrified that he may accidentally be ‘outed’ by the media accompanying Diana.

Donnie (Andrew Paul) is an Essex fireman. He’s been around for a long time, and as a consequence is not the most enlightened of men. In many ways, Donnie is the epitome of what was known at that time as “Basildon Man” – hard-working, determined to get ahead and make a better life for his family. Whilst Donnie has reservations about Prime Minister Thatcher, he does applaud certain policies like the introduction of the right to buy his council house. Donnie is happily married and has three children. A son from whom he is estranged and two daughters he dotes on. Three individuals then, whose lives are about to be altered by the arrival of a tall beautiful woman wearing a blue dress and displaying a fearlessness that few were willing to emulate.

I fully expected to end up emotional after watching Moment of Grace, and I certainly was. I was deeply moved, shocked and even ashamed as I remember those times. The shame came from when I worked on a hospital radio station and wouldn’t go onto the AIDS ward for reasons that now are totally indefensible. The writing could easily tug on the heartstrings but writer Ben Gosling doesn’t take the easy way out. The viewer gets to know Jude, Andrew and Donnie, The people they were and the people they are now. The stories told by Jude and Andrew are pretty upsetting but I found some of my strongest reactions were to little moments in their lives. For example, both Andrew and Jude check each day to see who has made it through. Andrew counts heads in the beds in the morning, while Jude checks the board during handover at the start of her shift.

As individuals, their lives reflect the reality around them. For Jude, her work has made her realise how unimportant so much of life is. Andrew knows what his destination is going to be but doesn’t know when he will be taking the final trip. Donnie is possibly the hardest character to bond with. As his story unfolds, you think you know where it is going to go – believe me you will be wrong – and for me, it was only in the final few minutes that I felt something positive about Donnie, but when I did, the floodgates opened.

All three actors really put themselves on the line to portray their characters and make them people we could believe in and understand. I have to mention Luke Dayhill whose performance really blew me away. There were moments when Luke as Andrew would break into a gleaming smile and, just for a second, you could see the carefree young man that once lived life to the full. But then you could see the smile hadn’t quite got to his eyes which was heart-breaking to see. Shakespeare said “the eyes are the window to your soul” and in Luke’s case, they were at the heart of his performance.

Moment of Grace is not a happy film. But this was not a happy time, as is beautifully illustrated with a selection of headlines from Fleet Street’s finest, not to mention the words overheard by Jude “I hope they find a cure for AIDS, just not too soon” For sufferers and those that worked with them, there was no happy ending.

As the screen fades out we all know that Andrew is unlikely to be visited by her again. We know that Jude will have to see more of her patients die and may have to face the wrath and judgement of her friends and flatmates who didn’t know she worked on an AIDS ward. As for Donnie, whilst my heart wants his story to go one way, I’m afraid he is likely to go another and will suffer as a result. But, this is a positive story and is based on the actual event. Princess Diana’s visit did much to make people think about AIDS and re-evaluate their ideas on it and, as the news reported that night, her visit to the hospital was worth all the government propaganda put together.

Created as a three-character play, Moment of Grace looks at the famous visit of Diana, Princess of Wales to London’s first AIDS Unit in 1987, where she shook a patient’s hand without wearing gloves and in doing so triggered a momentous shift in public and media perceptions of people living with HIV & AIDS.

Moment of Grace explores the impact of this landmark day on three people: Andrew, a patient; Jude, a nurse on the ward; and Donnie, a fireman estranged from his son. The production also takes inspiration from the oral history testimonies that have been collected by the National HIV Story Trust’s archives, and other original interview material, ensuring real experiences are respectfully represented on-screen.

Originally the play was slated to run at The Actors Centre’s flagship venue, Tristan Bates Theatre, but during the Covid-19 lockdown, Moment of Grace was reimagined for the screen. Adhering to social distancing guidelines with actors self-shooting at home, the result is a powerful film-theatre hybrid.

Moment of Grace will stream on The Actors Centre website from 7.30pm on 31st July to 11.59pm on 9 August.
https://www.actorscentre.co.uk/theatre/moment-of-grace

I wouldn’t exactly say Ben Forster appearing as himself in this musical comedy is a career highlight (he is, after all, someone who has played the … END_OF_DOCUMENT_TOKEN_TO_BE_REPLACED

It’s an intricate plot, laced with some subversive humour - that the female character is simply called ‘The Woman’ (Molly Lynch), for instance, is … END_OF_DOCUMENT_TOKEN_TO_BE_REPLACED

Andrea McArdle didn’t, when the 1978 movie Rainbow was released, look or sound like Judy Garland, and she still doesn’t. You’d be forgiven for … END_OF_DOCUMENT_TOKEN_TO_BE_REPLACED

TENNIS ELBOW is the first play that John Byrne has written for thirteen years, and is in fact a companion piece to his critically successful Writer’s … END_OF_DOCUMENT_TOKEN_TO_BE_REPLACED

It’s all a bit banal, really - or perhaps I’m too heavily influenced by some of the other online productions that I’ve seen recently, which deal with … END_OF_DOCUMENT_TOKEN_TO_BE_REPLACED