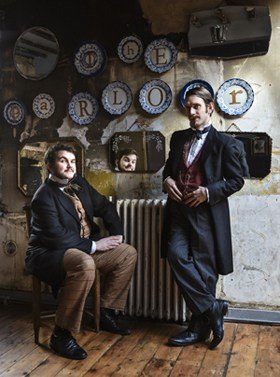 Enter a world of time travelling magicians. Allow yourself to be transported back in time to a Victorian Parlour where two rather ‘spiffing’ chaps are going to entertain you with some tricks. In the lovingly restored first generation Music Hall, Wilton’s is the perfect setting for a little after dinner entertainment. It’s crackers, it’s clever, it’s comedy; it’s a magical show in a magical place.

Rhys Morgan and Robert West are comedy magicians who can count Derren Brown as one of their fans. They don’t rely on lights and special effects, they fully confess to being liars and cheats but they are so charming, you really don’t mind. The audience is very involved in the show, many are called upon to try and catch them out and to witness close up their seemingly impossible illusions.

This is traditional magic; cards, feats of memory, an incredibly bizarre visual display of how to use all the senses, items disappearing and reappearing right under our very noses; it would almost be cheeky if they weren’t so likeable. Their camaraderie is warm and their banter entertaining; it seems a little caddish how they so blatantly fool us. Their mock honesty is almost a challenge to prove otherwise and is all part of the clever misdirection.

This is a flawless, well rehearsed, well executed performance. Morgan and West are skilled and incredibly talented and very enjoyable. The characters they project and the set where they work their magic feels new and fresh because it is based in the past, a little quirk that breathes new life into old tricks. I was captivated and transfixed trying to focus on just how they did it, even the constant stream of audience assistants came back to their seats baffled. Glorious mind boggling crazy fun; these guys are witty and engaging with chemistry to rival Ant and Dec. A fabulous night out for all the family, the petition to give them their own T.V. show starts here….

Time travelling magic duo Morgan and West present a brand new show chock full of jaw-dropping, brain-bursting, gasp-eliciting feats of magic. The dashing chaps offer up a plateful of illusion and impossibility, all served with wit, charm and no small amount of panache. Be sure to wear a hat – Morgan and West might just blow your mind.
morganandwest.co.uk

This play was first put on at The Mill at Sonning in early 2010 - the world has, of course, changed significantly since then, and the script has been … END_OF_DOCUMENT_TOKEN_TO_BE_REPLACED

It’s easy to see why the Orange Tree has brought this one back for another run, less than a year after its first outing here. This is a bold, … END_OF_DOCUMENT_TOKEN_TO_BE_REPLACED

I always loved Choose Your Own Adventure books. Definitely not the Steve Jackson ones where you had to roll dice (who did that?) to find out whether … END_OF_DOCUMENT_TOKEN_TO_BE_REPLACED

Well, there’s a bit about Pablo Picasso’s (1881-1973) paintings in this show that bears his name. But it’s mostly about his approach towards women. … END_OF_DOCUMENT_TOKEN_TO_BE_REPLACED