According to a friend who holidayed in Cornwall, “everything” in Cornwall is Cornish – that is to say, there are far more products that have some sort of Cornish label on them than those that don’t. Cornish tea, Cornish beer, Cornish chocolate, Cornish ketchup, and of course, Cornish pasty. Like most places, one has to be savvy and selective when it comes to choosing where to buy from, to avoid overpaying for goods that could be purchased for cheaper elsewhere, off the beaten tourist trails. Morveren, interestingly, paints a theatrical portrait of a village that doesn’t want any tourist trade at all. 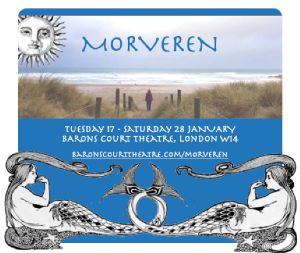 When Keren Weiss (Charlotte Blandford) takes her daughter Ellie (Aysha Niwaz) to the place where she (Keren) grew up, it’s at least in part because there isn’t much information about the village available online. They make their home in Didsbury, a suburb of Manchester, and Cornish village life is distinctly different – with no hotels in the immediate vicinity, Morven (Alessandra Perotto), Keren’s grandmother, takes it upon herself to take them in for the night. But ‘just one night’ is a bit like ‘just one drink’ at the pub, and anyway, Ellie is determined not to undertake the return car journey to Manchester quite so soon.

The other reason Keren is there is, as she keeps saying, for work purposes – I’d have liked to have heard the ‘other’ side of her miscellaneous phone conversations. Who uses a mobile phone to make and receive voice calls for work these days – does she not respond to her clients via WhatsApp and have online meetings via Zoom or Teams? But it demonstrates the point, as clearly as it possibly could, that Keren is from Cornwall and lives in Manchester but talks in Estuary English, because she thinks it’s necessary to conduct oneself in every conceivable way in the manner that people, predominantly men, higher up the chain of command in the large firm she works at, do. It’s not entirely clear whether this includes the sort of morally and ethically dubious practices the corporate world is known for – the show doesn’t re-enact anything of that nature – nonetheless, she’s always switched on, burning the proverbial midnight oil.

Ellie is of an age that still embraced the idea of mermaids and legends (until such time as she decides such stories are “stupid”). But, having been forbidden to do pretty much anything other than breathe, eat and shower by her mother, whose concept of ‘risk’ extends only to the likelihood of losses relative to the return on investment, the child gets her own back, devising, within oodles of spare time she has thanks to her mum doing yet more work, a proposal to raise funding to secure the long-term future of the village. In other words, a chip off the old block, and a nuanced and a distinctly unannoying one at that.

Morven is effectively the village’s matriarch, a sort of queendom (as opposed to a kingdom) that rejects outside help and sustains itself. It’s more than a little fantastical, and very exclusive, in that anybody that wasn’t born into that community, however much they share their values and however much they are willing to accept and fully participate in their way of life, is excluded – if I’ve understood correctly – without exception. In this regard, the show has a kind of snobbishness of its own, looking down on city living as artificial and soul-destroying, and yet there’s no invitation to the outside world that says, “Join us! Be a part of something different!”

I did, mind you, like the completeness of the story. For instance, a question about why there aren’t any men in the community is answered fully, including the use of a lilting song. Sound effects sprinkled throughout the show helped to create a rural, sometimes outdoor, and sometimes festive, atmosphere. A bit like the tide, the narrative ebbs and flows, and there are moments, particularly in the first half, that could have been pacier. Oh, and I had to smile at the story asserting that being offline is better than being online, whilst the only way of accessing a programme for the show was digitally, by scanning a QR code. Overall, it’s a curious and intriguing tale, brought to life by committed and convincing actors.

Ambitious banker Keren is determined to make her mark. In a male-dominated industry, she’s learned that the way to get ahead is to speak loudly, strut your stuff, and sell sell sell. But the siren’s song is calling her name, drawing her back to her roots.

Meanwhile, Keren’s grandmother Morwen knows it’s time to pass down her wisdom, knowledge and place in her grieving community. Inheriting the village’s leadership was never part of Keren’s plan, but her daughter, mermaid-obsessed Ellie, loves it here.

Drawing on Cornish mythology, Morveren is centred around a hidden coastal village where women make the rules and no one has to shout to be heard. Using theatrical magic and a digital choir to imagine an alternative way of living, Morveren is a celebration of community and a coming of age for three generations of women.

Like most people, I think, I often have mixed feelings about a show I see. Occasionally, though it is rare, there will be a production where … END_OF_DOCUMENT_TOKEN_TO_BE_REPLACED

“The times they are a-changin'”, as Bob Dylan put it - and as a deceased woman’s grandson (Phillip Jones) returns home to attend the funeral, the … END_OF_DOCUMENT_TOKEN_TO_BE_REPLACED

It’s not often that the entertainment tastes of an intellectually snobby middle-aged woman and an action-mad 10-year-old boy align perfectly, but … END_OF_DOCUMENT_TOKEN_TO_BE_REPLACED

Notre Dame is the latest digital production by Threedumb Theatre, live-streamed from The Space in Canary Wharf, London and directed by Stephen Smith, … END_OF_DOCUMENT_TOKEN_TO_BE_REPLACED