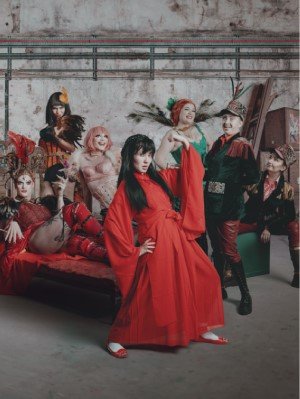 When Mulan’s father receives a call-up to the International Forces Union, to defend against the approaching Hun, Mulan decides to go in his place, disguising herself as a man, and finds herself posted to Paris, in the Moulin Rouge nightclub. No, I don’t know why, either. From the madcap brain of ShayShay, this premise is an excuse for a bawdy night out, in which I was in near-constant fits of laughter.

Anyone who has experienced a drag queen roast will come prepared for the fierce, cutting, bitchy humour, which can be edgy but never feels like it is punching down. Here, the nightclub madame holds court – and keeps her dancers on a tight leash. It’s a promenade performance, with the action taking place on three stages across a long room, used very effectively for the farcical elements straight out of Luhrmann, with complicated love triangles and hidden trysts, waiting to be discovered.

But don’t let me mislead you: the plot very much takes a backseat in a performance which is 10% story and 90% cabaret. In its embrace of gender fluidity, this is an affirming show, which wears its queer colours very brightly indeed. The irony for something so loud and in-your-face is that I am quietly charmed by the confidence and euphoria of characters and cast given the opportunity to be themselves. Mulan, and his (by this point) love interest have the instant when they know, when both declare at the same moment that ‘gender is a social construct’. The show is 18+, but the funny thing is that the younger you are, the less likely to bat an eyelid at people living their best lives.

This is a dining performance (though non-dining tickets are available), and the food was delicious, and elegantly provided, banquet-style, by old hands Flavourology. The courses broke up the action. That said, those not dining found themselves staring at an empty stage. Even with the slightly rushed service (the show must go on, right now!), there were chunks of time where we tried to converse across the table, only to find hearing impossible against the background noise, and gave up. I wonder if some sort of non-story-advancing performances could be inserted during these slots. As it stands, I wouldn’t advise non-dining tickets, unless you really can’t eat the food, even with their admirable efforts to cater to all dietary requirements.

The inspiration is loose, and much dramatic licence is taken with the source material. That’s fine: this is a joyful riot, and one that has me in delighted stitches. There’s no deep philosophical treatise at its heart, but its message – that being yourself is just ace – is enough.

Bohemians, you have been invited to the spectacular of the century, the Mulan Rouge! It’s time to leave your gender at the door, adorn your finest armour and pack your glitter purse – or risk bringing dishonour to us all.

This year, the heart of The Vaults has been transformed into the infamous Mulan Rouge, a scandalous haven of dancing and naughty delights.

The Vaults, with ShayShay, have taken the wonderful worlds of Disney’s Mulan and Baz Luhrmann’s Moulin Rouge and crashed together a drag-tastic parody – fusing comedy, burlesque and a feast to boot. This is a cabaret of fabulous kings and queens, set to take you on Mulan’s journey of self-discovery; and where better to make that discovery than the Mulan Rouge!

Like most people, I think, I often have mixed feelings about a show I see. Occasionally, though it is rare, there will be a production where … END_OF_DOCUMENT_TOKEN_TO_BE_REPLACED

“The times they are a-changin'”, as Bob Dylan put it - and as a deceased woman’s grandson (Phillip Jones) returns home to attend the funeral, the … END_OF_DOCUMENT_TOKEN_TO_BE_REPLACED

It’s not often that the entertainment tastes of an intellectually snobby middle-aged woman and an action-mad 10-year-old boy align perfectly, but … END_OF_DOCUMENT_TOKEN_TO_BE_REPLACED

Notre Dame is the latest digital production by Threedumb Theatre, live-streamed from The Space in Canary Wharf, London and directed by Stephen Smith, … END_OF_DOCUMENT_TOKEN_TO_BE_REPLACED