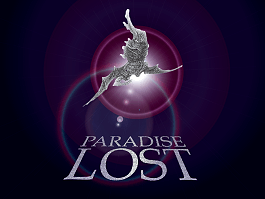 Like many people throughout the world I’ve heard of John Milton’s epic poem Paradise Lost but never actually got around to reading it. Let’s be honest the original 1667 version was over 10,000 lines of verse – all very worthy but not exactly right for a quick read on the bus. Luckily, Lee Ormsby and Jonathan Wakeham not only read it but decided it could be translated into a musical and the result “Paradise Lost” has been recorded into a concept album that left me begging for the show to be made and hit the West End sooner rather than later.

The musical explores the background and politics of a heaven led by the cynical, manipulative Archangel Gabriel at the time The Almighty – for reasons that are not explored by to me suggested boredom – starts the creation of the Earth and mankind, a new race so unlike the angels of heaven in having free-will and the ability to shape his own destiny. The perfection of Heaven is only slightly marred by the presence of Lucifer (now calling himself Satan) a charismatic but fallen angel who wishes to return to his former place as Guardian of the Gate. This leads to strife, rebellion and war as Lucifer rallies other angels (upset by the concept of a new race able to control their own lives) to his side and challenges the political status quo and power of The Almighty. Inter-weaved throughout this story is a wonderful narrative of love between the cold and work fixated Archangel Michael and one of the newest angels in the Empryean, the heavenly centre of operations, Angelis. This love is spotted by Satan who realises that it is the one chink in Michael’s army and using a combination of charisma and lies manipulates Angelis to assist him in his quest for power as she is torn between love and power.

I’ve now listened to the album three times in succession and think it is truly wonderful. As the story progressed I could imagine the staging of the show itself. The whole thing flows beautifully and if the cast on the album is the same in the show itself, this is going to be hell (if you’ll pardon the pun) of a night out. The three leads, Lucifer (Ricardo Alfonso), Angelis (Charlotte Wakefield) and Michael (Matthew Wycliffe) were superb bringing an entire range of emotions to their various number, both solos and duets. I also absolutely loved Stephen Carlile’s cold, haughty Gabriel – particularly in the wonderful “Young & in Love” – and my favourite track was “Lusty” sung by Asteroth (Me’sha Bryan) with its fabulous sound of sultriness.

My final word on this awesome album: someone needs to drop a copy of it onto Cameron Mackintosh’s desk today so that the world can enjoy this fantastic show.

Its classic themes of good vs. evil, of forbidden love and the temptation of power are also at the root of all today’s superheroes as they battle great external evils – and the villainy inside themselves. PARADISE LOST has been brought to the stage before in many guises, but has always felt more suited to the study than the stage, more thesis than theatre. This new musical version takes it right back to where it began – as a bold, visionary bestseller that tackles human themes on a heavenly scale.

I wouldn’t exactly say Ben Forster appearing as himself in this musical comedy is a career highlight (he is, after all, someone who has played the … END_OF_DOCUMENT_TOKEN_TO_BE_REPLACED

It’s an intricate plot, laced with some subversive humour - that the female character is simply called ‘The Woman’ (Molly Lynch), for instance, is … END_OF_DOCUMENT_TOKEN_TO_BE_REPLACED

Andrea McArdle didn’t, when the 1978 movie Rainbow was released, look or sound like Judy Garland, and she still doesn’t. You’d be forgiven for … END_OF_DOCUMENT_TOKEN_TO_BE_REPLACED

TENNIS ELBOW is the first play that John Byrne has written for thirteen years, and is in fact a companion piece to his critically successful Writer’s … END_OF_DOCUMENT_TOKEN_TO_BE_REPLACED

It’s all a bit banal, really - or perhaps I’m too heavily influenced by some of the other online productions that I’ve seen recently, which deal with … END_OF_DOCUMENT_TOKEN_TO_BE_REPLACED