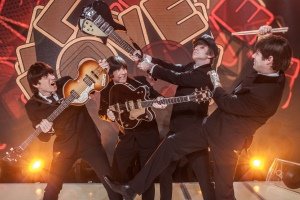 Hearing orchestral versions of songs made popular by The Beatles isn’t a brand-new phenomenon. Later in 2019, the Royal Liverpool Philharmonic Orchestra will also tour, providing orchestral renderings of the Fab Four’s back catalogue, and the London-based Royal Philharmonic Orchestra has previously released an album called Symphonic Sgt. Pepper, which does what it says on the cover. Here, the National Philharmonic Concert Orchestra, a twenty-piece outfit, flanks the four main stars of the concert, who are all very good actor-musicians. The attention to detail is commendable – the costumes are there, particularly the ones for the selection of songs from ‘Sgt. Pepper’s Lonely Hearts Club Band’. There’s even a left-handed guitar used on stage.

There are plenty of video projections throughout the evening – few, if any, were strictly necessary, as many only seemed to unnecessarily reinforce what was either going on or about to happen. An example: when a street sign reading ‘City of Liverpool, Penny Lane L18’ popped up, I rather sardonically wondered which song was about to be performed, and I wasn’t proved wrong, fortunately, or unfortunately. The images were never inappropriate or anything of the sort, but the show would have been just fine without all that technological wizardry. The music and the actors and orchestra who play it should really have been left to stand on their own merits.

Rather like the musical Let It Be, a show that all four actors were a part of, the narrative is minimal, which matters far less here in All You Need Is Love as it is presented in a concert format anyway; one doesn’t attend gigs and expect a dramatized storyline with songs interspersing the dialogue. There are some introductions and asides along the way, mostly to keep everyone on the same proverbial hymn sheet, though these are kept to almost the bare minimum. This is fair enough: the hardcore Beatles fans know it all already (not that they are pompous, rather that they are very knowledgeable about their favourite band), and anyone else who is intrigued by what they see and hear can read up on as much or as few details as they wish afterwards.

With a keen focus on the music, this production packs the songs almost like passengers crammed onto the Central line at 8:15am on a weekday morning. ‘Yesterday’ was rather rushed through, at a tempo that comes close to betraying its usual reflective and wistful nature. There’s something about the performance that comes across as repetitive, in the sense that the ‘stand and deliver’ method, so consistently used, doesn’t give the audience much to look at, especially when there’s no discernible storyline to digest.

The orchestral melodies felt, overall, more like easy listening than any other sort of genre. Then again, the only sort of 1960s music I listen to with any regularity at all are musical theatre showtunes from that period, so perhaps this departure from my usual playlists impacts on my assessment of it all. Either way, hearing ‘Imagine’ to the strains of the violins, violas and cellos made that song all the more poignant. Mixed in with the big hits were lesser-known numbers, some of which I was experiencing for the first time in this concert, at least to the best of my knowledge.

The production serves its target audience well enough, with many of them rising to their feet, without being explicitly invited to do so, for ‘Hey Jude’, which closed the show on a feelgood note (having been preceded by ‘Yellow Submarine’). There’s depth to The Beatles’ music that the orchestral arrangements help to make clear. It’s not the most engaging concert I’ve been to, but nonetheless, it was a decent and enjoyable night out.

Backed by the National Philharmonic Concert Orchestra, All You Need Is Love is a unique concert spectacular featuring the music and immeasurable talents of The Beatles.

After paying their dues in the famous Cavern Club in Liverpool and building their reputation in Hamburg, The Beatles unleashed their first single in the UK and went on to top the charts across the globe and change the world forever.

All You Need Is Love
With the National Philharmonic Concert Orchestra
Thursday 18 April 2019, 19:30
https://cadoganhall.com/