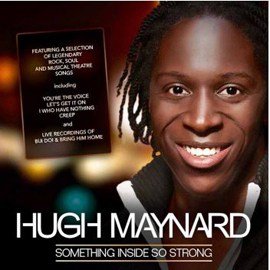 The last time I heard Hugh Maynard sing was in Miss Saigon where his emotional rendition of ‘Bui Doi’ had me reduced almost to tears. So when I was asked to review his self-produced album “Something Inside so Strong” I was really intrigued to see what this musical theatre performer could do. The track list was my first clue that this was not going to be an album of musical standards, as I saw a fantastic mixture of classical songs and show tunes – all arranged by Hugh himself – that would require an amazing vocal ability to pull them off successfully. Luckily, it turns out Hugh has an abundance of talent in this area. It would be easy to go through each track individually and comment on Hugh’s various arrangements of rock, soul and theatrical tunes that are pretty compelling – I’ve listened 5 times so far and loved the album more with each playing – but I’m not going to. Instead I will talk about some of my favourite tracks and recommend you get the album to hear the rest.

The title track opens using just Hugh’s voice accompanied by a piano, and starts to build, adding a backing chorus, strings and more instruments – with Hugh’s voice growing stronger all the time, until it reaches a crescendo of powerful emotional lyrics before fading back with just the piano completing the song. What a start to the album that was.

Moving on and I’m going to be honest here. For all sorts of reasons, I think ‘Bring Him Home’ is the worst and most overrated song from ‘Les Miserables’ – prepares to go into hiding to escape angry Les Mis fans – but Hugh’s sweet voice and committed emotional delivery, again accompanied just by a piano, really delivers a truly memorable, for all the right reasons, version of this song for me.

On ‘I who have nothing’ Hugh displays a mastery of arrangement and delivery that can’t fail to draw the listener in as he expresses his frustration at not being able to provide everything he wants to the person he loves – a situation that many of us can easily identify with – who he may lose to someone wealthier, flashier and more able to provide creature comforts. By the end, of the song, I was so deeply involved in the lyrics that I really wanted to wade in and tell Hugh’s potential paramour to sort themselves out and put the poor guy out of his misery with a kiss of fidelity. Following hot on the heels from this track is one of my all-time favourite love songs ‘When a Man Loves a Woman’ with its story of the sacrifices that a man is willing to make for the woman of his dreams. These two songs, delivered by a master of listener manipulation, were more than enough to reduce me to sniffing heavily – I’ve got a cold, honest.

All told, this Hugh Maynard’s “Something inside So Strong” is a superb album with a great combination of songs that you will either know already or get to discover and fall in love with for the first time, thanks to this wonderful singer whose talents are never going to be confined to the stage. It’s not often an album doesn’t have a bad track on it but “Something inside So Strong” proves the exception to the rule. Even after the 5th sitting, I’ve not had the urge to skip any track – though I have re-played a couple. Nor have I thought that any song sounded like it didn’t belong as I’ve listened to each track, appreciating the range of Hugh’s voice and the personal emotion he has obviously put into every song. Just magic.

Hugh Maynard – Something inside so Strong gives an amazing insight into Hugh’s range and eclectic musical taste. Key tracks include Marvin Gaye’s Let’s Get It On, John Farnham’s You’re The Voice, Seal’s Kiss From A Rose and his own showstopping anthem Bui Doi from Miss Saigon.

The album is available at the Prince Edward Theatre, Dress Circle Records and via Hugh Maynard’s official web-site
(www.hugh-maynard.com). A digital version is available to download on iTunes and Google Play.

Further information and events will be released on Hugh Maynard’s Facebook page (www.facebook.com/OfficialHughMaynard).
Hugh said, “I have dedicated this album to the people who have continued to love and support me. It is amazing what you can achieve when people have belief in you”.

Hugh Maynard has a long history of delighting audiences in musical theatre, on TV, as a musician and concert performer. He made his West End debut in Andrew Lloyd Webber’s Jesus Christ Superstar playing Simon Zealotes and Judas Iscariot. Since then he has appeared as Simba in The Lion King, and has performed in Notre Dame de Paris, Follies, Dancing in the Streets and Sister Act.

Hugh has also enjoyed success touring the UK, Europe and America singing with the rock group The Tenors of Rock. Hugh performed at the 2012 London Olympic Games concert and sang with The Tenors of Rock on The X Factor in 2013, reaching the judges home stage with Gary Barlow.

Hugh Maynard – Something Inside So Strong
Complete Track Listing
1. Something Inside So Strong
2. Let’s Get It On
3. Bring Him Home
4. You’re The Voice
5. Kiss from a Rose
6. I Who Have Nothing
7. When a Man Loves a Woman
8. Get Here
9. Creep
10. Back at One
11. Bui Doi
12. Love Is On the Way
All songs recorded, arranged and produced by Hugh Maynard

I wouldn’t exactly say Ben Forster appearing as himself in this musical comedy is a career highlight (he is, after all, someone who has played the … END_OF_DOCUMENT_TOKEN_TO_BE_REPLACED

It’s an intricate plot, laced with some subversive humour - that the female character is simply called ‘The Woman’ (Molly Lynch), for instance, is … END_OF_DOCUMENT_TOKEN_TO_BE_REPLACED

Andrea McArdle didn’t, when the 1978 movie Rainbow was released, look or sound like Judy Garland, and she still doesn’t. You’d be forgiven for … END_OF_DOCUMENT_TOKEN_TO_BE_REPLACED

TENNIS ELBOW is the first play that John Byrne has written for thirteen years, and is in fact a companion piece to his critically successful Writer’s … END_OF_DOCUMENT_TOKEN_TO_BE_REPLACED

It’s all a bit banal, really - or perhaps I’m too heavily influenced by some of the other online productions that I’ve seen recently, which deal with … END_OF_DOCUMENT_TOKEN_TO_BE_REPLACED