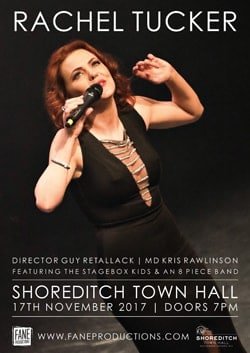 “She’s imperfect, but she tries / She is good, but she lies / She is hard on herself / She is broken and won’t ask for help…” The haunting lyrics of ‘She Used To Be Mine’ from the Broadway musical Waitress filled the beautiful Assembly Hall of the Shoreditch Town Hall, performed with poignancy and passion by Rachel Tucker, in what was billed as ‘her biggest solo concert to date’. It’s a cliché, but one really could have heard a pin drop.

The acoustics of the venue, truth be told, weren’t the best. If the odd lyric or two proved impossible to decipher, this was nothing to do with Tucker’s vocals, which were in such fine form that she could be heard quite adequately at the start of the second half even though she had, by her own later admission, forgotten to switch her hand-held microphone back on.

It’s playing Elphaba, the misunderstood (by other characters) protagonist in Wicked in both the West End and on Broadway that Rachel Tucker is best known for, to the point where, having almost blown the roof off the auditorium with ‘Defying Gravity’, some audience members assumed that was the end. It’s often easy, of course, to tell at a concert when the end isn’t really the end, as the orchestra, having risen to receive applause, sits back down. Here, the house lights had come back on and the musical director, Kris Rawlinson, had led his band off stage. But there was still more to come, ensuring that the audience got even more for their money. As for Wicked, the irony was not lost on a lyric from an Elton John number: “I’ve finally decided my future lies beyond the yellow brick road”.

A jazz version of ‘Where Is Love?’ from Oliver! was a refreshingly different take on a well-known tune. Tucker’s rapport with the audience was warm and pleasing, with regular descents from the platform in order to be amongst the fans and followers. One need not be a fan of Wicked (I saw the show once, and once was enough) to appreciate proceedings, and while there were plenty of moments that are best described as defying subtlety, Tucker can perform with quiet sincerity as well as loud affirmation. 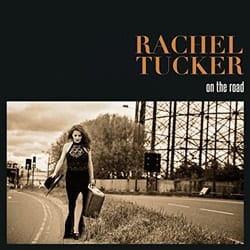 Anecdotes about Tucker’s upbringing, her husband and their son, and being in various productions over the years, were amusing and informative. There weren’t any hecklers in this unassuming audience, but if there were, I would have thought she’d have dealt with them quite deftly, given her previous experience doing gigs in the clubs of Belfast with her family. A couple of duets with fellow ex-Elphaba Emma Hatton (a third, Kerry Ellis, was in attendance) were a pleasure to listen to.

The concert appeared to have gone on for longer than some had expected it to – a few people, mindful of last train times from mainline stations, stayed as long as they could but reluctantly had to slip away. Nonetheless, the evening felt considerably shorter than it was, and a mixture of upbeat and reflective numbers, familiar musical theatre standards and less-well-known songs, ensured there was something for everyone to enjoy. There were even a few rapped lines in the style of Lin-Manuel Miranda’s Hamilton.

If I were to pick one highlight, I would plump for a performance of the Act One closing number in Dear Evan Hansen, ‘You Will Be Found’, which also came just before the interval in this concert. Flanked by dozens of youngsters from the Stagebox Musical Theatre Choir (who stood in the aisles waiting to come on as Tucker sang ‘Children Will Listen’ from Into The Woods – make of that what you will), this was ensemble singing and dancing at its finest.

An accomplished performance, relaxed and confident, powerful and poignant.

Performing as herself and joined by a dynamic nine-piece band, Rachel performs with a choir of fifty up and coming child stars from the Stagebox Musical Theatre Choir, providing all of the necessary ingredients to create an especially magical evening.

Think back. Has anyone ever said to you that looks don’t matter, its personality that counts’ Anyone … END_OF_DOCUMENT_TOKEN_TO_BE_REPLACED