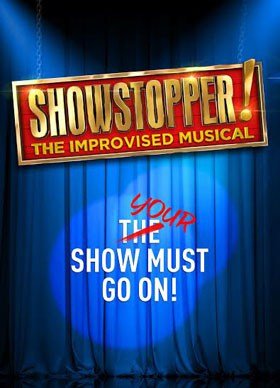 Live improvisation – but a musical? I agree, it sounds ridiculous. It also sounds a bit pants, it may well be funny, but it couldn’t possibly be a good musical.

There’s nothing about this that should work. The concept is simple enough in theory, the director (Dylan Emery) allegedly gets a call from the Producer asking for another musical. He gets the audience to shout suggestions, and ends up with a setting, musical styles and a snappy title, voted for by audience cheer. The suggestions are then made into a show on the spot by the cast and musicians, every now and then stopped by Emery who gives direction of what to do next.

Showstopper! is infuriating. It’s infuriatingly good. Everyone involved makes it look like this is so easy, anyone can do it eight times a week. All you need is a setting (Marks & Spencer in 1884), some musical genres (Avenue Q, Book of Mormon, Dreamgirls, Into The Woods), a random music style (AC/DC!) and a title: “Making Sparks!” and before you know it you’re watching a show with strong characters, catchy songs and even a scene where the characters perform in the style of different playwrights.

And it wouldn’t work at all, if the cast and musicians weren’t so good at it. They communicate so well that only rarely do you see hesitation or uncertainty, these performers are 100% in tune with each other. Improvising harmonies can be tricky enough if you have a song you know, but as you’re making it up is mind-blowing.

But no matter that it’s technically impressive, it’s a blast. Never mind that some things don’t quite make sense (Mr Marks and Mr Spencer being brothers where one has changed his last name, for example), but the more absurd, the funnier it gets. Sure, we do end up with a pig joke, by way of Prime Minister Gladstone appearing and Percy Pig becoming a major plot point, you can’t quite escape the obvious joke.

And at the end, it all comes together, and the audience leap to their feet in one of the most enthusiastic standing ovations I have seen in a long time. An absolute must for any lover of musical theatre, and for anyone who likes laughing.

Showstopper! The Improvised Musical at the Apollo Theatre
A brand new musical is created from scratch at every single performance of this multi award – winning show. Each night, audience suggestions are instantly transformed into an all-singing, all-dancing production with unpredictable and hilarious results! With seven years as an Edinburgh Fringe must – see phenomenon, four sell-out West End seasons and an acclaimed BBC Radio 4 series to their name, The Showstoppers have delighted audiences across the globe with their ingenious blend of comedy, musical theatre and spontaneity. Whether you fancy Sondheim on a ski lift, or Cole Porter in Poundland – you suggest it and The Showstoppers will sing it!