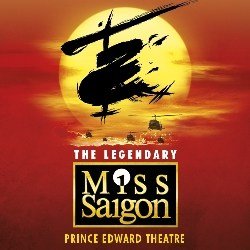 The Prince Edward Theatre on Old Compton Street has seen some pretty huge shows in its time, and none is bigger than the one currently in residence “Miss Saigon”. It’s been 25 years since the original show opened and this new award-winning production, which opened in 2014, looks like it is set to stay for another 25.

Based on Puccini’s ’Madama Butterfly’ Claude-Michel Schönberg and Alain Boublil have moved the story to Saigon in 1975 where American forces are fighting, and losing, the Vietnam war. Saigon is a corrupt city where The Engineer (Christian Rey Marbella) runs ‘Dreamland’ a bar/nightclub/brothel assisting tired GIs with a bit of R&R between their trips to the interior. For the girls working the bar, every night is potentially the night when they finally meet a special GI who will love them and get them that all-important American visa so that they can escape the march of the Viet Cong and the destruction of their current life. Tonight, there is a new girl in ‘Dreamland’. Virginal 17-year-old orphan Kim (Eva Noblezada), nowhere near as street-wise as the rest of the girls, led by the vivacious Gigi (Rachelle Ann Go) has just arrived and is serving in the bar. Also in the bar tonight is Chris (Alistair Brammer), an army sergeant based at the US Embassy and his best friend John (Hugh Maynard) who wants to enjoy everything on offer and is so much of a buddy to Chris that he ‘rents’ Kim for him for the night. After they spend the night together, Kim has an unwelcome visitor in the shape of Thuy (Ethan Le Phong), a man to whom she was betrothed by her father before his death. Unfortunately for Thuy, in the short space of time they have been together, Kim and Chris have fallen in love. Thuy is dismissed, vowing that Kim will honour the promises of her father and be his wife and Chris promises to take Kim back to the US with him, not knowing – how could he? – that Saigon was about to fall and he, along with everyone else in the embassy would be leaving the city with no opportunity for goodbyes.

Three years on and Saigon, now renamed Ho Chi Minh City, is a very different place under its communist masters, with banners, parades and celebrations of the third anniversary of the defeat of the Western Imperialists. Thuy is now a Commissar in the regime and has managed to track down The Engineer – derided as a collaborator – who he offers freedom if he can locate Kim for Thuy. This he does, discovering on the way that Kim has had a very busy three years since the fall of Saigon. Chris meanwhile is back in the USA and despite suffering from what today would be called post-traumatic-stress-syndrome has managed to make a life for himself and his wife Ellen (Tamsin Carroll) but when John gives him news of Kim, he has to go to see her – now working with The Engineer in a bar in Bangkok – and Chris, Ellen and John go there for an emotional and tragic reunion.

So, what to say about this show. It is amazing in every respect. The staging is superb and the set design by Totie Driver & Natt Kinley is wonderfully flexible and authentic looking. Director Laurence Connor has ‘darkened’ the production in some respects from the original – for example it is made obvious very quickly and rather graphically what happens in ‘Dreamland’ – and these changes really work in setting the emotion of the story itself. Technology is used superbly, be it something simple such as a video screen depicting the Bui Doi – children of GIs left behind in Vietnam and being punished for being born – during the opening of Act II and the iconic helicopter evacuation which, thanks to a combination of light, sound, projection, air movement and fantastic acting was unbelievably real and heart-wrenching for the audience. A show about tragic love between two people needs lead actors that really have chemistry between them, and Kim and Chris seemed to have that in abundance. Many of their numbers, such as the haunting ‘Sun and Moon’ are duets with just the two of them on stage, and Eva and Alistair really delivered them making sure there was no doubt about the love between Kim and Chris. There were some superb solo performances to admire as well, and here I am singling out Tamsin Carroll’s wonderful performance of ‘Maybe’ as Ellen finds out more than she wants to know and is offered something that she cannot contemplate. Then there is The Engineer in all his conniving, cunning, sycophantic, self-centred glory. Christian Rey Marbella delivers every facet of the man to us to the point where, while he is repugnant, there is something of the loveable rogue about him. This is especially true in ‘The American Dream’ which is a huge ‘West-End style’ song and dance number with chorus girls, chorus boys, a Cadillac, the Statue of Liberty and jazz hands aplenty as The Engineer dreams of his future once he leaves Bangkok and travels to the US of A. An awesome piece of musical theatre that ensures “Miss Saigon” (not exactly renowned for its frothiness) never gets too heavy.

“Miss Saigon” is simply fantastic. The story is not a happy-clappy one, but the writing, directing, and delivery will ensure that you never forget your first visit and will want to be going again and again.

Set in 1975 during the final days of the American occupation of Saigon, Miss Saigon is an epic love story about the relationship between an American GI and a young Vietnamese woman. Orphaned by war, 17-year-old Kim is forced to work as a bar girl in a seedy Saigon night club owned by a disreputable wheeler-dealer known as ‘The Engineer’. John, an American GI, buys his friend Chris the services of Kim for the night. That night will alter their lives forever.

From its London premiere in 1989, Cameron Mackintosh’s production of Alain Boublil and Claude Michel Schönberg’s epic musical Miss Saigon has become one of the most successful musicals and one of the best ever to play the Theatre Royal Drury Lane.

As well as record-breaking London and Broadway runs, Miss Saigon has been performed in 28 countries, in 300 cities in 15 different languages, and has collected over 40 awards including 2 Olivier Awards, 3 Tony Awards, and 4 Drama Desk Awards and been seen by over 35 million people around the world.

The comedy value in this episode of The Seth Concert Series was off the scale. Christine Pedi has done several productions of the Forbidden Broadway … END_OF_DOCUMENT_TOKEN_TO_BE_REPLACED

The album for this show, I Could Use A Drink, was released in 2013 but there were nonetheless moments when it felt very much like the show was written … END_OF_DOCUMENT_TOKEN_TO_BE_REPLACED

It’s easy enough to get immersed into a production like this. Even in its concert format, there’s something compelling about the way in which the … END_OF_DOCUMENT_TOKEN_TO_BE_REPLACED

I wouldn’t exactly say Ben Forster appearing as himself in this musical comedy is a career highlight (he is, after all, someone who has played the … END_OF_DOCUMENT_TOKEN_TO_BE_REPLACED

It’s an intricate plot, laced with some subversive humour - that the female character is simply called ‘The Woman’ (Molly Lynch), for instance, is … END_OF_DOCUMENT_TOKEN_TO_BE_REPLACED