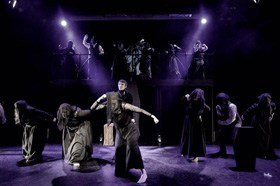 I am ashamed to say that Bram Stoker’s iconic Dracula is still a classic on my ‘to be read’ list. Having watched Dracula a new musical by Alex Loveless at the University of West London I am now eager to rectify this.

The musical based on the novel by Bram Stoker is told in diary form. A simple yet extremely effective setting of coffins and extraordinary acting by the London College of Music’s third-year students. The props and costumes were well thought of and fit the era perfectly.

Jarvis Linert is a compelling Dracula his stage presence is both captivating and terrifying. He manages to portray sensuality as well as to appear a tad creepy, which is exactly what vampires were like before the likes of Twilight. I would love to see him in a completely different role after his performance in Dracula.

Matt Szadura was enchanting as Jonathan Harker – the change in the confident man at the beginning to the man haunted by nightmares was extremely impressive, a character I was rooting for throughout. Such a strong cast of actors and actresses I was hanging on their every word.

Dracula was alluring, seductive and compelling. The music was pitch perfect and the songs were addictive. A few of the songs reminded me of Les Miserables and The Phantom of the Opera. A truly impressive selection of new music that you will remember long after leaving the show.

A university production worthy of a West End stage. I would love to see this show again, it would definitely become one of my favourites.

Dracula played at London College of Music from 2nd to 5th December. A larger-scale reworking of a show which played at the White Bear Theatre in 2008 and received some excellent notices at the time.

The work was performed by final year BA Musical Theatre students with live string quartet and backing tracks. The new orchestrations are by Andy Smith, music assistant to John Cameron.

Alex is the recipient of a Vivian Ellis Prize for most promising newcomer, the Howard Goodall Award for composition and is a professional writer associate of and reader for Mercury Musicals Development.

The Ministry of Lesbian Affairs, produced by Damsel productions, is currently running at The Soho Theatre until 11th June. I went along and was totally blown away! Everything about this production is first class, the writing, staging, lighting, sound design, casting and the performance levels. Damsel Productions have added all the ingredients to make this a […]