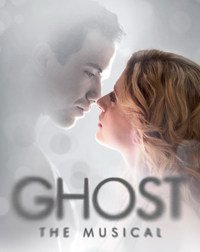 If I am asked to describe Ghost The Musical in as few words as possible I would quite simply say: “It is beautiful”.

Will it be a success in London’s West End, I will say “You betcha!”

I am confident that this musical will also hit Broadway and be a success there too.

Okay, what are the ingredients to make this musical a success?

The film Ghost (1990), written by Bruce Joel Rubin won an Oscar for Best Original Screenplay and is a classic romantic film with outstanding performances by Patrick Swayze, Demi Moore and Whoopi Goldberg, for which she was awarded with Best Supporting Actress. The film is a success and a classic.

Why mention the film? Well quite honestly Bruce Joel Rubin knows how to make a successful film. Ghost the film has grossed over $500 million dollars, so he knows a thing or two about how to make something special happen. He wasn’t sure whether it would be a success as a musical, until he met Dave Stewart and Glen Ballard, and then he knew it could be. These are two musicians who are also songwriters and producers who are at the top of their profession, and you don’t get better than that!

Glen Ballard won the 2006 Grammy Award for Best Song Written for a Motion Picture, and has produced or performed with countless musical stars including Michael Jackson, Christina Aguilera, Shakira, and The Corrs, the list is long!

The fact is that when you put this type of success together and it works, then you have one very successful show, and that is what we have with Ghost The Musical. Together with Director Matthew Warchus, this musical will take London by storm. Watch out at the next set of award ceremonies as Ghost The Musical will have a major selection of winners – or I will eat my hat!

Our main review of the show will arrive later today but apart from what I have written above, two major components tell me this musical will be a success (apart from the fact that I thought it was brilliant!).

Firstly, many people have already been to see the show several times since its opening in Manchester, and the standing ovation started with the Ensemble. Those two things alone indicate Ghost The Musical is and will continue to be a major success in London’s West End.

If any critic doesn’t like this musical then they need to get their head out of the sand and hear the words “Welcome to the 21st Century!”

To conclude and as a warm-up for the main review of the show, Caissie Levy and Richard Fleeshman are outstanding. Caissie has such a beautiful voice and Richard was fabulous. They reach out and touch your heart, you had better believe it! There were also outstanding performances from Sharon D Clarke, Andrew Langtree, and Adebayo Bolaji.