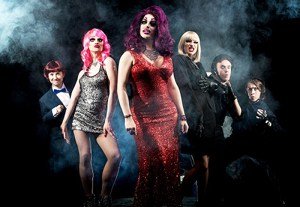 Do you know what is missing from the West End? A well written, well produced and well acted drag musical. Yes, we have the brilliant Kinky Boots but it’s not quite the same as a show that revolves totally around drag. If you agree, then you are in luck because, a stone’s throw from the heart of the West End is the Chelsea Theatre where, as part of the London LGBT Pride Cultural Festival, they are presenting Heels of Glory.

The finest drag club in the whole world is La Douche and on the stage, under its glitter ball, one drag queen rules the roost. Her name is Splendorella (Topsie Redfern AKA Nathan Kiley) and she is not only the drag queen everyone wants to be but is also the face of the hugely successful cosmetic range created by Allura Supreme (Sarah-Louise Young). Tonight is a very special night at La Douche because at midnight, Allura is releasing a new foundation aimed solely at the drag queen market. It’s also a special night for someone else. 17 year old drag queen Honey (Matthew Floyd Jones) is with her best friend, wannabe secret agent Jay (Susan Harrison) and really wants to get into La Douche to see her heroine, Splendorella, and maybe get a free sample of the new make-up. The only thing stopping them are The Henchmen (Grace K Miller, Holi Dillon, Josh Morris and Kiki Lovechild) on the doors. But nothing will stop Honey getting inside La Douche tonight and she and Jay blag their way into the club, where Honey not only gets to meet her heroine but, with Jay’s help, uncovers the secrets of the club and gets involved in a conspiracy that could have a profound effect on drag-kind forever.

Now, I have seen a lot of drag shows in my time, well everyone has to have a hobby, but this is the first time I’ve seen a full musical based around drag, and I have to say I loved every minute of it. There was everything that you would expect from drag, truly stunning costumes by Designer Neil Gordon, fantastically over the top make-up and wonderfully expansive gestures. But as well as the traditional elements, there was a great story by Tricity Vogue – with some wonderful double entendres and wordplay – and some highly enjoyable songs composed by Richard Link. Put all these together with Production Designer Meth, AKA Benjamin Giddins and Director Stephen Heatley’ s obvious knowledge of how to stage a crowd pleasing and highly entertaining show and you know you are in for a fabulous evening.

Of course all this would be great but when you add in the wonderful Topsie Redfern AKA Nathan Kiley as Splendorella then the show moves from great to fabulous. Topsie looks stunning from the moment she hits the stage and her performance really is first rate. She really brings the character of Splendorella to life and, in the song ‘You Can’t Change What I Am’ brings a wonderful vulnerability to Splendorella’s personality. Topsie is matched with an equally skilled cast and my favourite was definitely Susan Harrison’s Jay. She really puts everything into the diminutive potential James Bond in an energetic performance that takes the breath away. Not forgetting the 9th member of the cast – you the audience. If you are lucky enough to be in the right seat, you may find yourself – as I did – suddenly being addressed as Birly Shassy and loving every minute of it.

I know some people don’t like drag queens or kings, and if you are one of these then I would really advise you to put away your preconceptions of drag and think of Heels of Glory as an extremely entertaining piece of musical theatre. For two hours or so it will make you forget your life outside as you follow the story of Splendorella, Allura, Honey and Jay. By the end, you will have seen a great story and been thoroughly entertained by consummate professionals who should be thinking of taking this lovely show closer to the centre of town.

Ultimately, Heels of Glory grabs your attention as soon as you enter the theatre and never lets it go until you finally leave. If you have been as captivated and enchanted by the play as I was, you will have danced on stage with Splendorella and bought the CD. As a way to really get into the Pride Season, Heels of Glory cannot be beaten and should be on everyone’s calendar to experience as soon as possible.

Finally, if you are worried about the appropriate outfit to wear for Heels of Glory, then I leave you with the wise words of Splendorella herself “We are all born naked, everything else is drag”

DRAG action musical Heels of Glory is set to headline at this year’s London Pride Festival, with a three week run at Chelsea Theatre from 9 – 26 June.

Written by cabaret performer Tricity Vogue with music by award-winning composer Richard Link, Heels of Glory is an original musical with an action adventure plot and tunes inspired by vintage Bond movies.

Pride Festival Curator, Duncan Day, said: “It will be one of the strongest headline events Pride in London Festival 2016 will have on its programme this year. Heels of Glory’s colorful production will provide great entertainment and joy to the LGBT+ community.”

Richard and Tricity met as singing teacher and student, and conceived Heels of Glory seven years ago. Since then the show has sold out work-in-progress performances at the Royal Vauxhall Tavern and The Albany in Deptford. It was workshopped at Shoreditch Town Hall in 2014 and was awarded Arts Council funding for a two day sell-out run at Chelsea Theatre last year.

The story opens at nightclub La Douche, where international drag superstar Splendorella (Drag Idol finalist Topsie Redfern) is about to launch a new cosmetic to a waiting world of drag queens. But Supreme Sure Fire Foundation is not all it seems – its villainous creator, Allura Supreme (award winning cabaret artist Sarah-Louise Young), has a secret master plan to annihilate all the drag queens in the world. Budding young drag queen Honey (Matthew Floyd Jones of duo Frisky and Mannish) and her tomboy best friend Jay (Susan Harrison from Olivier award winner Showstopper!) are all that stand in her way. Doing Allura’s bidding are a hapless bunch of henchmen played by Kiki Lovechild, Josh Morris AKA Beth Necessity, Holli Dillon and Grace K Miller AKA Good Ness Gracious.

The show is directed by Stephen Heatley (Head of the Department of Theatre and Film at the University of British Colombia, Canada) with production design by Meth, member of drag collective The Family Fierce and star of London Live’s Drag Queens of London.

Tricity Vogue, AKA Heather Tyrrell, is an international cabaret performer and award-winning scriptwriter with a wide number of credits in TV and theatre. Richard Link is an award-winning composer of musical theatre, choral music, and music for film, television and dance.