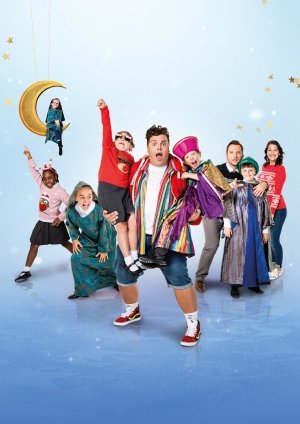 Almost the second the clock turned over from 31st October into 1st November Halloween was forgotten and it officially became the lead up to Christmas. With theatres across the country making the final preparations for pantomime season, it seems a little odd for venues to be showing a production that quite clearly takes its inspiration from panto, however the decision could not be a better one.

Following the story of a primary school teacher’s rapidly snowballing white lie about a Hollywood producer watching a school nativity, his ongoing rivalry with an old classmate-come-opponent, his new friendship with a zany child-like teaching assistant, and his attempt to resurrect a relationship with his estranged ex-girlfriend, the story is simple but far from boring. It’s easy to follow nature is perfect for the younger generations but still contains enough substance to entertain all ages.

The staging was perfect, the sets were innovative and attractive, and the costumes and props were ideal. It really was the complete package when it comes to production, and the entire creative team (including brilliant director and writer Debbie Isitt, composer Nicky Ager, choreographer Andrew Wright, and designers David Woodhead, Tim Mitchell and Tom Marshall) have absolutely surpassed themselves in crafting a flawless show.

The cast worked together seamlessly. Scott Garnham was superb as the grumpy yet endearing Mr Maddens. He absolutely nailed the emotional turmoil his character endured and his occasional dry comic quips were timed to perfection. As a contrast, the over the top craziness of Scott Paige’s Mr Poppy made him an instant favourite with kids and adults alike. His never faltering energy, hilarious movement and fabulously funny delivery mean he is absolutely made for this role. The two together are the perfect pair and you can’t help but love them both. Ashleigh Gray sang beautifully and excelled as love interest Jennifer Lore, Charles Brunton thoroughly earned his boos as the mean but riotous Mr Shakespeare, and Penelope Woodman was just right as the eccentric yet delightful Mrs Bevan. Add to them the hugely versatile Jamie Chapman who was hilarious in his various guises, an excellent supporting ensemble and the adorable Cracker the dog (played by cute and cuddly Pepper) and in most shows it’d be hard to add anything that would enhance the production. However, Nativity! The Musical has an ace up its sleeve, or should I say a (miniature) pack of cards…

I am talking about the true stars of this piece, and that of course is the children – ‘Sparkle and Shine’ they certainly did. They were full of vigour, hugely talented and showcased such a polished product it’s astonishing. The variety of characters they depicted ensured that there was never a dull moment, they really did work together impeccably, and you could quite clearly see that every single junior member of the cast was having the time of their life (although that can also be said for the entire senior cast too).

So I find myself in a position I have never been in before, but fortunately it is an enviable one. I am awarding my first ever five star score in a review. Nativity! The Musical is non-stop fun, laughs and heart-warmingly wonderful moments. Even the biggest “Scrooges” out there won’t be able to resist its charm, and it is an essential outing in the lead up to Christmas. Do not miss it.

Feel-good, funny and full of joy, this cracker of a musical was adapted for the stage by Debbie Isitt, the creator of the much-loved films.

Every child in every school has one Christmas wish, to star in a Nativity, and at St Bernadette’s School they’re attempting to mount a musical version! Only trouble is teacher Mr Maddens has promised that a Hollywood producer is coming to see the show to turn it into a film. Join him, his teaching assistant the crazy Mr Poppy, hilarious children and a whole lot of sparkle and shine as they struggle to make everyone’s Christmas wish come true.

Featuring all of your favourite sing-a-long hits from the movies including Sparkle and Shine, Nazareth, One Night One Moment, She’s the Brightest Star and a whole host of new songs, this musical really ‘is a heartfelt hit’ (The Times).