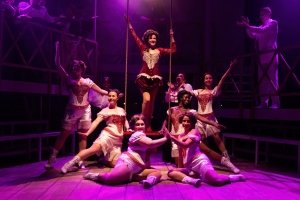 If proof were ever needed that the multimillion-dollar set used in the original Broadway production of Ragtime The Musical was largely superfluous (it apparently featured fireworks and a fully functioning Model T), this production by Sedos is it. An orchestra of eighteen and a cast of thirty-two is impressive for the West End these days, let alone amateur dramatics. The production team is worth a mention as well, for several reasons. During the full ensemble numbers, stage space is at a premium, and yet the choreography (Victoria-Louise Currie and Rachael Elfassy-Bitoun) gives the impression that there is ample room for movement.

It is difficult to balance out the sound with a cast and an orchestra as large as this, but the techies here do a remarkable job, with not a single lyric or line of spoken dialogue missed thanks to each and every microphone functioning as it should throughout. I realise I come across as someone rather easily impressed, but it continues to be surprising how many productions fail to pay sufficient attention to details such as these. The lighting (Olly Levett) is also well designed, placing the right sort of emphasis on particular characters as the narrative progresses, ensuring, for instance, a sort of intimacy in the house of Father (Andrew Overin) and Mother (Chloë Faine), or the feel of a substantial crowd at a rally held by the anarchist Emma Goldman (1869-1940) (Zo Pisera).

The storyline is almost as tricky to navigate as the technical aspects of the production: with three main groups whose stories intersect in ways that would be giving too much away if elaborated on here. Firstly, there’s what I’ll call The Family, because they’re not given names other than the aforementioned Father and Mother, plus Little Boy (Evan Huntley-Robertson) and Younger Brother – that is, to Mother (Robert J Stanex). Secondly, there’s Coalhouse Walker Jr (Jonathon Grant), a professional pianist, and Sarah (Sara Rajeswaran), with whom he has had a son, eventually revealed to be Coalhouse Walker III (on opening night, Dwayne Ravenor, the role being shared with Brooklyn Appiah). Thirdly, there’s Tateh (Rob Archibald), an artist from Latvia, and his daughter, named only as Little Girl (Jessica Helfgott).

If that wasn’t complicated enough, there are public figures of the era thrown in as well, including Harry Houdini (1874-1926) (Daryl Armstrong), the business tycoon JP Morgan (1837-1913) (Stephen Beeny) and civil rights leader Booker T Washington (1856-1915) (Chris Nelson). There are also thirty-three musical numbers to get through, though the three-hour running time flies by in this slick and enthusiastic production where it is palpably clear that its participants are enjoying bringing this epic tale to life.

Unlike the Regent’s Park Open Air Theatre production in 2012, which had some bizarre costume choices and even more curiously, a large picture of President Obama on a billboard (the show is set in 1902), the costumes (Deborah Lean) are appropriate to the period. There are, however, two causes of a negligible amount of irritation. One is that a couple of American accents aren’t wholly convincing. The other is that an inordinate amount of stage smoke seemed to engulf the front two rows of the audience in an early scene. A production really isn’t doing badly at all if I’m being that picky.

It’s difficult to pick out standouts when there are quite a few decent moments to choose from. That said, in the first half, ‘Wheels Of A Dream’ is gloriously impactful as an expression of a version of the American Dream, while in the second, ‘Back To Before’ is, despite the song’s title, Mother’s emphatic declaration that the future will be substantially different from the past. Well, it is in many ways, though it is a sad indictment that the Black Lives Matter movement, which began in 2013, is necessary more than a century after the horrifying scenes dramatized in Ragtime. There’s a lot to take in and a lot to think about in this show, but it isn’t overly confusing, and it is as tragic as it is inspirational, as passionate as it is poignant.

Ragtime – with book by Terrence McNally, music by Stephen Flaherty and lyrics by Lynn Ahrens – is a sweeping epic musical about the birth of America that weaves together real celebrities and historical events with a timeless tale of three families in pursuit of the American Dream.

In the melting pot of New York, the stories of a stifled upper-class wife, a determined Jewish immigrant and a daring young Harlem musician are intertwined, united by their desire for and belief in a brighter tomorrow. Together, they confront history’s timeless contradictions of wealth and poverty, freedom and prejudice, hope and despair — and what it means to live in America.

The 1998 Broadway production of Ragtime was nominated for 13 Tony Awards and won four, including best original score.

This new staging from Sedos, the City of London’s premier theatre company, brings Ragtime to the Bridewell Theatre, just off Fleet Street, where Sedos is the resident theatre company. A huge cast of 33 and an 18-piece orchestra will breathe new life into this compelling story of courage, love and hope.