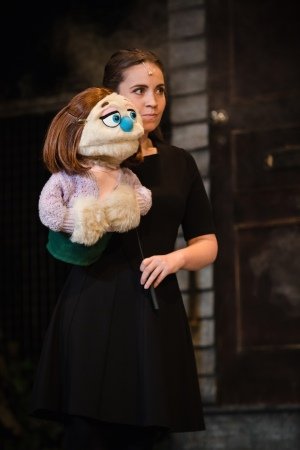 In 1969 Sesame Street hit public television, it took the world by storm and for many years was the absolute king when anyone talked of puppetry. Jim Henson – one of the main contributors to Sesame Street – branched off and produced The Muppets, who (along with Sesame Street), reigned supreme as puppetry masters of the entertainment world. That was until 2003, when writers Jeff Marx and Bobby Lopez threw a spanner in the works. They created something the world needed (although it didn’t know it yet). They took a group of loveable puppets, added a bit of in-your-face realism, stuck a finger up at modern theatre etiquette, sprinkled in some really, really un-pc content and the result… Avenue Q!

There is nothing in the world quite like this musical. Its uniqueness is part of its brilliance. There are times you are crying with laughter at its complete lack of respect for subtlety and politeness, and times where the content is almost uncomfortably familiar. But put simply, Avenue Q is un-missable, heart-warming and hilarious!

Tonight’s performance (and presumably every show of this tour) was superb. None of the cast’s performances seemed out of place or below par, and when the final product is so polished it’s difficult to single out individuals. That said, understudy Ellis Dackombe, who stepped up from ensemble to a pivotal role (Nicky/Trekkie Monster and others) shone through, delivering flawless comic timing and impeccable characterisation throughout. Lawrence Smith and Cecily Redman also deserve a special mention for their impressive ability to interchange seamlessly between multiple characters, allowing the audience to connect with each character and share empathy with the storyline, but every member of the puppet-holding cast were brilliant. When it comes to the less numerous solely human roles (not something you will often read in a theatre review!), all were equally impressive, but Saori Oda as Christmas Eve, deserves extra recognition for drawing smiles and laughter from almost every line she delivered.

To summarise, Avenue Q is fantastic. It has loveable and hilarious songs, a fun easy-to-follow storyline and a truly talented cast. It isn’t for the faint of heart as the majority of the content is rude and shocking, but as it is never aggressively offensive anyone who doesn’t mind a bit of naughtiness will enjoy it thoroughly. Go see it, you won’t regret it.

Created by Jeff Marx and Robert Lopez (Co-creator of Book of Mormon).
From the producers of Footloose, Flashdance and American Idiot.