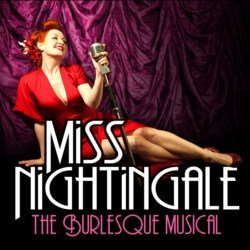 Sing, sweet nightingale… The tagline for new musical Miss Nightingale: Sex, Scandal and Showbiz, conjures visions of a raunchy, salacious performance: exciting for the eye, glitz and glamour prioritized over storyline. But though enticing, the tagline perhaps doesn’t do the show justice. This is more than just a spectacle; it’s a moving, funny and grounded tale of taboos and prejudice in Britain during the Second World War. The different musical genres included in the show: from jazz to ballad, tongue-in-cheek ditty to heart-wrenching plea, meld together perfectly to evoke the spirit of the 1940s.

Writer/Director Matthew Bugg transports his audience to the streets and clubs of London during the Blitz, where ‘Northern songbird Maggie Brown’ (Amber Topaz) and her songwriter George (Ilan Goodman), a Polish-Jewish refugee, are on the search for fame. They convince wealthy nightclub owner Sir Frank Worthington-Blythe (Tomm Coles) to book Maggie as his starring act. With a new name and repertoire, Miss Nightingale takes the stage. But behind the scenes, trouble brews.

While the set is relatively minimal, lighting and props are cleverly used to depict different scenes – the nightclub, George’s bedroom, the Savoy. And through his characters, notably George, Bugg gives an insight into other eras and a window on the raging conflict and horrific persecution by Hitler’s officers in the once cultural and artistic hubs of Berlin and Warsaw.

A key theme is the persecution of homosexuals in an increasingly conservative Britain: hinting at the irony that while Britain fought against Hitler’s brutal and genocidal campaign to rid his nation of non-Aryans, this country was at the same time arresting those who were different – homosexuals. Bugg weaves real events into his storyline, like the arrest of 20 men in Wales who were prosecuted for ‘gross indecency’ in 1942. One of the men, just 19 years old, committed suicide as a result. So when George meets the handsome and charismatic nightclub owner Sir Frank, Bugg shows how their hidden love ‘threatens to prove far more dangerous than the Blitz.’
The multi-talented cast act, sing, and effortlessly pick up instruments, their accompaniment adding depth, warmth and mood to the piano line. The result is that the show is delightfully intimate. The three protagonists are particularly strong: their characters well-thought out and defined.

Amber Topaz, as Miss Nightingale, is something of a Lancastrian Charity Valentine. Gutsy, funny and sexy, she morphs from one burlesque character to the next, always maintaining her excellent comic timing and light touch. Topaz has a beautiful voice, particularly evidenced in Bluebird, a powerful prayer for her brother’s safety as he fights for the Allies, however she’s also able to let go of her inhibitions, rendering herself instantly likeable.

Coles and Goodman, as George and Frank, both command the stage powerfully. Coles’ voice has a fabulous tone, while Goodman’s passion and authenticity is remarkable. Alex Tomkins plays Miss Nightingale’s bullish and prejudiced love interest with great effect, indeed, within the entire cast there is no weak link. So despite its tagline, this is a glorious show, where quirky wit and innuendo lie above a deeper tale of love, loss, and hope, where every day needs to be lived as your last, and the best you can do is stand up and be counted.

This isn’t the first production to go down the road of referencing a one-star review of their show (from a different publication, I hasten to add). This sort of tactic sometimes works, like the show that apparently sold tickets having publicised itself as the worst show at the Edinburgh Festival Fringe – quite a claim, […]