Home » Reviews » Musical » Review of Parenthood at The Space 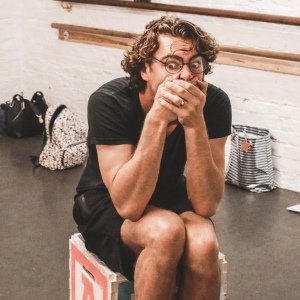 The flyer says, ‘Not an Instagram version of parenting’ and Emily & Pete Moody’s musical is exactly that.

On the hottest evening ever we needed some refreshing entertainment, and this we were given by the barrow load. From the laddish testosterone-fuelled bragging blokes and the naïve girls who definitely “won’t be having an epidural”, to the grandparents gleefully mocking their newly parented offspring, we are taken on a musical ‘warts and all’ journey through all the stages of parenthood.

The Space Theatre is appropriately situated in the East End, the home of the music hall. With a cast of 10, on a stage, barely 6 metres by 3 in a former church hall (non-air-conditioned), Fluffy TOP productions’ Parenthood helps to keep the music hall tradition alive. The songs are very funny: often hilarious, always apt, sometimes graphic but always with warmth, and with empathy towards the four couples.

The usual parenting insecurities are there – guilt, paranoia, doubt, there are a couple of fart gags, a bit of slapstick and watch out for the excellent cameo from the bloke from the building site who’s having his lunch. There are the over-competitive parents, the embarrassed teen, just about all aspects are covered.

There’s something for parents of all ages to feel a rapport with. Because the play deals with all stages of development, from conception onwards, each age group of a parent is cleverly catered for. The audience loved it, and seeing their reactions alone was worth the trip. From the whooping millennials to the wisely nodding seniors this was almost like a play in itself.

There were a few problems with the sound at times but that didn’t affect the cast’s performance one bit. Few props are used, few are needed, but maybe a giant fan could be shoe-horned in if this heatwave continues.

From conception right through to school, *deep breaths*… teenagers, empty nest and grandparenting this comedy musical will take you a journey through the highs and lows of parenthood.

Follow our parents as they embrace sleepless nights, guessing the doodles, school politics, teenage tantrums, figuring out when the hell they will get to have sex again, their children leaving home and the absolute delight of being a grandparent.

WARNING: This is not an Instagram version of parenting, this show is real, relatable, hilarious, heartbreaking and honest. True parenting… warts and all!

Think back. Has anyone ever said to you that looks don’t matter, its personality that counts’ Anyone … END_OF_DOCUMENT_TOKEN_TO_BE_REPLACED