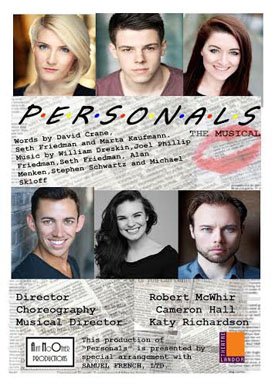 I imagine that not many people would know what to expect when entering the Landor Theatre for “Ain’t No Other Productions” theatrical production of “Personals The Musical” created by none other than the production team of “FRIENDS”.

The title doesn’t give too much away about the show – however the main storyline is literally about what it says on the tin – personal dating ads. This show is more of a musical revue featuring songs , monologues and scenes that could be taken out of the show and stand completely alone. This is what makes the show so exciting that you never know what is coming next .

With only three through line book characters – the remainder of the show intertwines hilarious and sometimes deranged walk on characters.

The cast of six do excellent things with this production. Six different composers and lyricists worked on this show so there really is a variety of styles throughout from classic 50s bop along ( Mama’s Boys) to contemporary musical theatre (“Imagine my surprise”, “The Guy I Love”) and even some blues (“Picking up the Pieces”) so the actors really must have great musical versatility – and they certainly do not disappoint.

Gilliland pulls out a beautiful show stopping ballad in the second act and is clearly a very talented singer and actress. Barrett goes from a camp “Mama’s Boy” to a strapping leading man with ease and Nevin has a subtle yet impacting lovely demeanour about her whilst on stage. Westberry is clearly a talented versatile actress as she has the most roles in the show which has the audience in fits of giggles.

The standout performances for me were by Matthew Chase and Robert Bannon. Chase delivers his geeky teenage boy role with such conviction that you just urge for him to find love by the end of the show and Bannon produces a range of characters with such clarity that your eyes follow his every move just to see what other hilarious character he is pulling out of the bag for you to laugh at hysterically.

I have seen this show done in various ways and this production certainly had excellent direction by Robert McWhir. Cameron Hall has produced some delectable choreography to match the wide range of musical stylings and Katy Richardson has created some beautiful musical delights.

“Personals” is a hilarious yet also sometimes agonising mix of stories that everyone has gone through or heard stories of in their dating history. With toe tapping numbers, amusing scenes and excellent up and coming actors and actresses – this show certainly does put a smile on your face.

Personals is a musical comedy following 6 characters and their journey through the world of online dating and personal adds. Personals was nominated for four Outer Critics Circle Awards (winning one) and four Drama Desk Awards including Best Score and Best Musical; winner 1980 American College Theater Festival.

The book is written by David Crane, Seth Friedman & Marta Kauffman, the team responsible for FRIENDS. The trials and tribulations of the 6 characters are accompanied by a dazzling score by William Dreskin, Joel Philip Friedman, Seth Friedman, Alan Menken, Stephen Schwartz & Michael Skloff.

Exploring both the Jewish and Christian faiths, Candlesticks in some ways puts forward some good arguments for systems of belief that exist entirely outside what is commonly deemed to be organised religion, such as atheism or humanism. It is rather contrived, in that Louise (Mary Tillett) is culturally Jewish but doesn’t exactly have an unshakeable […]