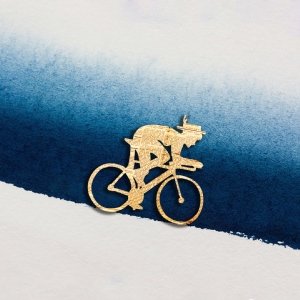 It is relatively easy to decide what to see in the West End because nearly all performances are high quality and are very polished shows; it is more complicated with brand new productions where often little is known besides the brief description available online. Somebody once said it is a lottery, you may be lucky, or you may lose a couple of hours of your life. Well, let me say, last night at the Vault Festival I won big with the show Ride – A New Musical: I laughed, I listened to great music and catchy songs, I learned the story of a larger than life 19th-century woman, and I enjoyed every single minute of the musical.

Ride – A New Musical is a new production written by Freya Smith (also Director and keyboard player) and by Jack Williams (also the guitar player), starring two incredibly talented young actresses, Amy Parker as Annie and Amelia Gabriel as Martha. The musical tells the true story of Annie Londonderry (real name Annie Cohen Kopchovsky), a Latvian Jew immigrant to the United States, that in 1894-95 was the first woman to cycle around the globe, allegedly as a result of a wager between two wealthy American gentlemen. The story opens with Annie, a very confident young woman, pitching her adventure to a newspaper to obtain a job as a columnist writer. The newspaper editors ask Annie to tell the story of her achievement and Annie obliges a very shy PA called Martha to help her in telling the story.

What follows is a wonderful example of storytelling, mixed with songs and funny gags. In 1894 Annie sets out on a very heavy and impractical ‘woman’s’ bicycle towards Chicago but soon realises she may have bitten off more than she can chew. However, after swapping her bike with a more practical men’s one and her skirt with men’s trousers, Annie embarks on a series of adventures through France, Africa, Asia, all the way back to the US in less than 15 months.

Along the way, Annie encounters a few colourful characters and the audience learns more about Annie, about why she accepted the challenge and about her difficult life and the fragility hidden behind the self-assured façade. Life has not been kind to Annie, she lost her parents at 16, had to care for her siblings, lost her brother, and faced a lot of antisemitism; however, she decides not to be defined but all of this and to make a life for herself.

The show has qualities worthy of a West End musical, supported by an incredible cast: Parker is perfect as Annie, she has an incredible voice, endless energy, and perfect timing, she can switch from one character to another without missing a beat. Noteworthy is the hilarious routine when she describes the wager between the two gentlemen: using just a coat hanger, she manages to play the two wealthy men at the same time, with side-splitting results. A mention also to Parker, who portraits the shy PA perfectly and that as the story progresses is wonderful as a French customs officer and as an American traveller.

The real star of the show, however, is the writing by Smith and Williams; it is slick, very polished, without a single false step. I was enthralled from start to end, never bored, craving for more. Every song is catchy, well written, and fulfils an objective, progressing the story and immersing the audience into the narrative. The direction is also impeccable, it is incredible what they can achieve with just a couple of chairs, a coat hanger and a filing cabinet. Who needs multi-million-pound sets, when a chair can become a bicycle, a filing cabinet a bench on a train and the imagination can do the rest?

One woman. One bicycle. One hell of a story.

It’s 1895 and 24 year old Annie Londonderry has returned victorious to America, hailed as the first woman ever to cycle around the world.

She’s pioneering, she’s plucky, and she’s pitching her story to the New York World. But as she shares her adventures, the cracks begin to show, and she’s forced to confront a past she’d rather leave unexplored.

RIDE is the incredible true story of a young woman with big plans, and an even bigger imagination, from the award-winning team behind VAULT sell-out THE LIMIT (★★★★★ FringeGuru).