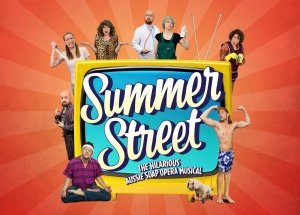 The axed cast of the Australian “soapy” soap Summer Street prove to the audience why they were taken off air after five years on the screen. By their dreadful acting skills and the lame storylines.

Summer Street written by Andrew Norris boasts some awful but extremely catchy songs, iconic surfing shirts and some big, bold wigs. The cast has all the ingredients necessary to encapsulate a spoof comedy sing-along about a low budget Aussie soap opera.

The soap plotlines are nothing special and follow the normal stereotyped themes expected. From who is sleeping with whom, to the delights of net curtain twitching from Mrs.Mingle. Everyone knows everyone’s business and nothing interesting is taking place.

Off-air though the cast’s personal life drama tells another story. Three of the four cast members turning to drink, drugs and prescription medicine in order to cope with life after Summer Street. As their careers died on set along with their characters.

Pogo deserves a special mention. The Street’s obligatory dog found in many good Aussie soaps. However, he is low maintenance and required little training as he can be led around on four wheels and stays where he is parked.

The cast of four are extremely entertaining and deliver the tongue in cheek one-liners with a relatively straight face which cannot have been easy as some are very cheesy and very funny. The highly talented cast of four actors ability throughout to not act properly, and to overact some of the scenes and miss cues takes a lot of skill.

The drunken actor role played by Simon Snashall is absolutely hilarious. His body language and facial expressions speak volumes. What a great actor!

The whole production is led by Basil the producer who is ever present as he speaks to the cast on the stage throughout. A strong voice authority who leads the cast through every scene. This tongue in cheek all-singing comedy spoof is a perfect pick me up for a good night out.

Bringing sun, songs and ’90s nostalgia, AJN Productions is taking Summer Street – The Hilarious Aussie Soap Opera Musical! out for a spin. This new musical is heading to The Blockhouse to delight Brighton Fringe-goers before transferring to Waterloo East Theatre to bring some sun and fun to London. As four Aussie soap stars try to resurrect their careers, there are hilarious and unexpected consequences – and, of course, plenty of songs to tap your foot to.