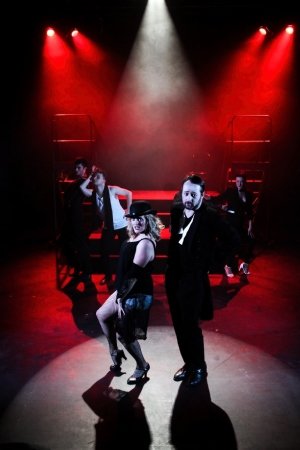 This is, as a fellow theatregoer pointed out to me afterwards, a tad too complicated for an orchestra, with forty or so musical numbers in various styles to get through, as well as sections of spoken dialogue, in around eighty-five minutes. The cast of six are therefore supported in this production of The Musical of Musicals (The Musical!) by musical director Natalie Pound, without further accompaniment. It’s an impressive achievement, really, given the sheer variety of music in this parody show, with lampooning of the mellow ‘If I Loved You’ from Carousel and the frenetically wordy ‘Getting Married Today’ from Company, and every kind of pace in between.

As the storyline is effectively the same basic plot five times over, but presented in the style of different composers, I might as well supply you with the basics: a landlord wishes to collect rent from a tenant. The tenant has a love interest who, each time, offers to pay rent on her behalf, presumably with a view to winning her over. She also has a friend who she turns to for support and advice. Whilst a lot of fun overall, this framework does place some limitations on where the narrative can go. Things do get a tad repetitive on occasion, which is, I suppose, itself part of the parody of certain show tunes that do go on a bit.

It is, therefore, not as bold as that other off-Broadway show that likes to take the biscuit, Forbidden Broadway. That other show seeks to parody the productions themselves rather than use them as vehicles for a separate narrative. Abby (Penny Rodie) almost brought the house down in ‘Follow Your Dream’, which came across to me as a cross between ‘Climb Ev’ry Mountain’ from The Sound of Music and ‘You’ll Never Walk Alone’ from Carousel. There are no weak links in the cast to report.

I couldn’t shake off the feeling that one does need to have seen at least a couple of shows by each of the composers featured (Rodgers and Hammerstein, Stephen Sondheim, Jerry Herman, Andrew Lloyd Webber, Kander and Ebb) to fully appreciate the fairly rapid number of references to the said shows. That said, it is possible to enjoy proceedings without a working knowledge of miscellaneous musicals – there’s some sparkling choreography to be enjoyed and as has already been noted, the storyline is straightforward enough.

Given that the show comprises, at a macro level, the same short story five times over, each version of the same narrative may not always make sense, but the show nonetheless punches above its weight in terms of actually maintaining the interest of the audience throughout. Daniel Saunders’ Jitter goes from a cross between Sweeney Todd of the Stephen Sondheim musical of the same name and George from Sunday in the Park with George to the title character in The Phantom of the Opera.

His isn’t the only one displaying versatility – Laura Ellis’ June channels her inner Eva Perón in such a way that nobody would be crying for her, whether from Argentina or otherwise. Joseph Dickens’ Billy, meanwhile, is as comfortable as a cowboy as he is as Evita’s Che. Completing the cast are ensemble members Lucy Spreckley and Alex Yelland, who are both superb.

For such a busy show, the stage is largely kept refreshingly sparse, at least relative to the amount of action going on. The closing number, a send-up of A Chorus Line, reveals quite who it is that the show has really been making digs at all along, albeit with subtlety – let’s just say it isn’t all about the composers. A bit of a rollercoaster experience but a slick and sincere one nonetheless.

A musical about musicals! In this hilarious satire of musical theatre, one story becomes five delightful musicals, each written in the distinctive style of a different master of the form, from Rodgers and Hammerstein to Stephen Sondheim.

The basic plot: June is an ingenue who can’t pay the rent and is threatened by her evil landlord. Will the handsome leading man come to the rescue?

The variations are: a Rodgers and Hammerstein version, set in Kansas in August, complete with a dream ballet; a Sondheim version, featuring the landlord as a tortured artistic genius who slashes the throats of his tenants in revenge for not appreciating his work; a Jerry Herman version, as a splashy star vehicle; an Andrew Lloyd Webber version, a rock musical with themes borrowed from Puccini; and a Kander and Ebb version, set in a speakeasy in Chicago.