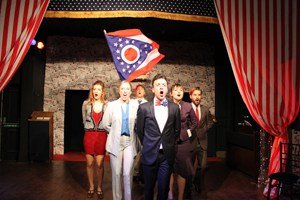 After a sold out run off-Broadway at Roy Arias Stages in the summer of 2014, the London Theatre Workshop presents VOTE FOR ME, a musical presidential debate where you pick the winner! The musical was commissioned by Robyn Goodman, the producer of Avenue Q, and penned by Drew Fornarola and Scott Elmegreen, who sought to create a heightened satire of American life that spoke to the state of American political culture at its best and its worst. Watch the candidates dance and sing their way through the three-ring circus of American politics as they fight for the highest office in the land. Book today so you can cast YOUR vote to determine the outcome of the show and the future of America.

Hans Rye plays Senator Buddy Rounsaville the Republican candidate for President taking part in this televised debate. His character is one who doesn’t seem to have any personal ambition to actually be President or seem to have any opinions of his own. Rye plays Buddy brilliantly. He has a great voice and the comic timing is spot on.

Emily Lynee is the Democratic candidate Janet Tilghman. Lynee shows the ability to play a slightly neurotic character whilst still managing having the audience love – which is impressive. Again the comedic aspect of the character was played flawlessly.

Definitely my favourite character and performance was Lucy Grainger as Robyn Fiedler, the moderator of the debate between the two Presidential Candidates, she portrayed the character superbly.

Jennie Jacobs is Buddy’s wife Amy Rounsaville, a power hungry woman who is only with her man to ride his coat tails, in this instance to become First Lady. Another stellar performance, great voice with a slightly distracting tight red dress… not in a bad way I hasten to add! Arvid Larsen plays Roger Tilghman, Janet’s long-suffering husband. For me this character seemed a little forgotten in the script. Arvid plays the wet Roger about as good as anyone can and the little sections Roger has were played well. I would have just liked a little more.

Joe Leather as The Advisor, another great all round performance. He advises both the Republicans and the Democrats, and this is symbolized with the turning of a folder showing a different image relating to the appropriate “side”. It wasn’t clear if The Advisor was meant to be one advisor for both sides or two different advisors just played by the same actor. 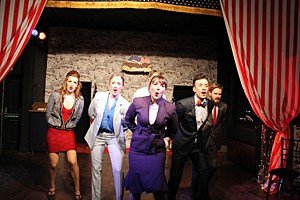 Vote For Me starts just before the Presidential Debate is due to air.
‘Middle East Disney’ is one of Janet’s numbers which is as inappropriate and hilarious as it sounds. With the venue being small I got concerned seeing the tap shoes until the number started, it was set perfectly for the size and the actual tap wasn’t too much – the patrons of the pub below might have a different opinion of course!

Janet and Buddy perform ‘Scandal Tango’ which is set fantastically involving a rope that the cast make into a boxing ring and the movement with this rope during the song is really clever. Buddy however refuses to use this scandal even though it would make him a dead cert for President.

Robyn’s big number ‘VOTE! (For Me)’ where she is trying to show how bad the U.S. is at voting involved listing all the countries who have a better turnout of voters than the U.S. Although this doesn’t sound too entertaining it got the biggest applause of all the numbers because listing 138 countries to music and dancing was phenomenal.

At the end of the evening and the audience vote for the winner. For us it was Janet who took victory and became the President. I would like to watch this again with Buddy winning just to see how different the show actually is depending who won.

Everyone really is fantastic in this show. I initially thought The Advisor was going to be the glue that held everything together so it surprised me that it was Robyn. Of course another audience member could have had a completely different opinion on that but the one thing we all agreed on was how great the show was.

HANS RYE will play Republican candidate Senator Buddy Rounsaville opposite EMILY LYNNE (‘She Loves Me’ – Landor) who will play the Democratic Candidate Governor Janet Tilghman. ARVID LARSON (Closer Than Ever – Jermyn St.) will play Janet’s long-suffering husband Roger Tilghman, alongside JENNIE JACOBS as Buddy’s pushy wife Amy Rounsaville. Attempting to control the proceedings will be LUCY GRAINGER (Fifty Shades of Grey – the Musical) as Robyn Fiedler, the moderator of the debate, and spinning each of the answers will be JOE LEATHER (Bathhouse the Musical) in the role of The Advisor.

VOTE FOR ME is a musicalized Presidential debate where you pick the winner. Candidates dance and sing their way through the three-ring circus of American politics, and audiences cast their votes to help determine the outcome of the show. The musical was commissioned by Robyn Goodman, the producer of Avenue Q, and penned by Drew Fornarola and Scott Elmegreen, who sought to create a heightened satire of American life that spoke to the state of their culture – in their case American political culture – at its best and its worst.

The musical premièred at the 2010 New York Musical Theater Festival, and played a sold out run off-Broadway at Roy Arias Stages in the summer of 2014.

Produced by Olga Marie-Pratt on behalf of the London Theatre Workshop, it will be directed by Dom O’Hanlon with musical direction by Chris Guard.

I had no idea such a movement existed, but it does: pickup artists ply their trade by sharing ideas about how to achieve sexual success with women. At first glance, it seems rather pathetic, with Jay Spears (Rufus Love, standing in for Adam Deary at the performance I attended) taking a group of men through […]