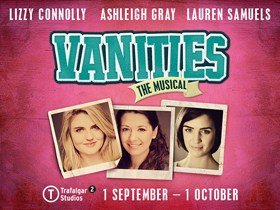 I’ll admit, I had my doubts. It’s taken 40 years for this show to reach London from America, and this is the more recent musical version of the said 40-year- old play. Even the composer and lyricist of Vanities The Musical isn’t absolute in his confidence that his show will work outside the United States. In a note in the show’s programme, David Kirshenbaum writes about the show’s characters being “clearly of a time, place, and milieu very different from London 2016”. Such fears, I am pleased to report, are utterly unfounded. Or, to put it another way, press nights and standing ovations only come together when justified.

The cast’s American accents and diction are impeccable. They do change, however, but this appears to be for dramatic effect. While Joanne (Lizzy Connolly), Mary (Lauren Samuels) and Kathy (Ashleigh Gray) start out looking and sounding so similar that they could be mistaken for being siblings rather than school friends, over time their strong Texan small town drawls either remain the same, or don’t, depending on whether they’ve moved away from where they grew up and/or moved up in the world. Allied to the subtle changes of accent post-interval is character development, or the deliberate lack thereof. It’s rare that such a device is used in this way, and it works perfectly with a strong and talented cast such as this.

The scene changes are purposely unhurried, and in the pauses between scenes as the set is moved around, the effect of the narrative not progressing for a short while has an impact on the show overall – and in a good way. Without the slow transitions, this production would otherwise be rather relentlessly rapidly paced, and frankly a tad exhausting. It seems odd to appreciate protracted scene changes, especially when shows will sometimes spend a considerable amount of money on a set that allows for quick ones, but it works to great effect here.

The musical numbers help to drive the story forward, and often in a style befitting the era being portrayed. In the first half in particular, there are distinctly loud-and- clear recognisable nods to the likes of Diana Ross, Burt Bacharach and Carole King to be enjoyed. The costumes are always a perfect fit for the point in the story in which they are worn, and the staging effectively sets time and place in a way that achieves an innovative balance between being unambiguous and leaving enough gaps for the audience’s imagination to fill in.

The show both provides and elicits a full range of human emotion, from sheer exhilaration at plans after completing university studies (not for nothing is one of the musical numbers called Fly Into The Future) to the pain of loss and bereavement. But it never loses its comedic flair, and even in its darkest or most confrontational moments (which make the characters all the more human), it retains an appealing charm. It helps, too, that our trio sound so beautiful irrespective of whether they are singing in harmony or individually. The blend between them and the band, ably directed by Tamara Saringer, was frankly extraordinary, and a real pleasure to enjoy.

Like many a musical, it’s possible to pick out things in the story that may be implausible. Any tensions or even differences of opinion are too neatly set aside to make way for a fairy-tale musical ending. But such an absorbing, wonderful and convincing company more than makes up for that. A glorious theatrical experience, this production of Vanities The Musical, skilfully directed and choreographed by Racky Plews, was compelling from start to finish. A resounding success.

Vanities is the hilarious and heartfelt story about three best friends growing up in Dallas at a time when image and style were more important than brains and ambition. Vanities explores how these women’s warped view of the world shaped them, for better and worse, through a rich original score that blends girl group harmonies of the 60s and 70s with a contemporary musical theatre score.

Directed and choreographed by Racky Plews (Footloose, American Idiot), with a book by Jack Heifner and music and lyrics by David Kirshenbaum, Vanities makes its London debut in time for the 10th anniversary of the musical and 40th anniversary of the play on which it is based. It’s time to go back to 1963 and watch Mary, Kathy and Joanne obsess over their cheerleader routines, choose their sororities, plan their wedding outfits – because even though the President has been shot and America’s on the brink of a war, if the girls just stay popular and don’t lose their looks everything will be okay… right?