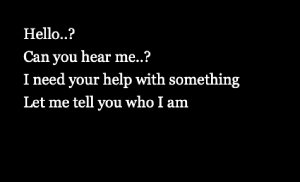 Well, it’s certainly an online interactive experience like one I’ve never encountered before. Myles Away tells the story of Myles Gordon (TL Thompson), the founder of a technological company called Open Eye Communications, which, if I’ve understood correctly, specialises in artificial intelligence (AI). Beyond that, much of the first half of the show left me rather baffled. Not because of the narrative, which was easy enough to follow, but the sheer amount of technological terminology being used. Not being versed in coding languages, a fair bit of what was said went over my head.

The basic premise of the show, however, is that a product is about to be launched by the company, but its founder, ousted by the other shareholders who he originally brought on board as investors in what was his company, has concerns about the ethical conduct (or, rather, what he perceives to be unethical conduct) of the company’s new leadership. The irony is not lost on anyone who establishes that he wishes to sabotage the future plans of the company by arguably unethical means. In a nutshell, and at the risk of slightly too much away, Myles wants the software behind the product about to be launched to be ‘open source’ (that is, available for anyone to access and modify, and for any purpose) whilst Open Eye Communications wants the software to remain ‘proprietary’.

There’s a level of interactivity in this online production, which is rather like those ‘Choose Your Own Adventure’ books from the 1980s and 1990s, in which there could be as many as forty possible endings to a given story, dependent on what the reader decides to do. I was rather more reckless and less risk-averse than I might have been in real life, and therefore my own experiences in this simulation may have been rather different had I not indulged in a suspension of disbelief. As it was, I found myself looking at some videos that turned out to be ultimately irrelevant to the final outcome of the show.

Techie jargon aside, there is some food for thought. I went along with Myles’ instructions – they were more ‘requests’ rather than ‘demands’ – but with the benefit of hindsight, it was, in a sense, religious-level devotion to his cause. Bizarre, really, given that the character I had assumed for the purposes of this immersive show had just started a new job at Open Eye Communications, and would, therefore – one would think – would want to keep their job for more than a day or two rather than act against ‘my’ new employer’s interests. I’m assuming, too, I applied for and was interviewed for the job, and in that process, researched the company and was therefore in agreement with whatever aims and purposes it has. So why the sudden change of heart? I’m still figuring that out.

Besides Myles and ‘Bina’, the company’s “AI assistant”, there’s Will Harper (Markese McLamb), now the chief executive of Open Eye Communications, whose conduct is indeed like the sort of executive who wants to maximise profit first and foremost. Joe Strickland, meanwhile, has a bit part as Connor White, the host of a technology news programme that reports on events in an amusing and animated way. Topics like elitism, capitalism and Black Lives Matter are talked about but could have been explored in more depth – one might even say the production feels a little rushed. That said, it was fun in parts and thoughtful in others.

Myles Away follows the founder of a tech company who gets laid off just before their annual product launch. The eyes of the industry are on the company’s flagship Virtual Reality product, but will they want all the attention on them once Myles has finished interfering with their event.

Using video, audio, and interactivity, this performance looks at the relationship between capitalism and discrimination in the tech industry and asks how far we as consumers are willing to go to make a positive change life. The performance is available with captions and audio description.

I don’t watch a lot of television but even I have some familiarity with the Up documentary film series, following the lives of fourteen people (it’s … END_OF_DOCUMENT_TOKEN_TO_BE_REPLACED

DRIVE THRU by Blink Dance Theatre is an immersive, multi-sensory dance theatre show, onboard a minibus. What’s not to like? Written, … END_OF_DOCUMENT_TOKEN_TO_BE_REPLACED

I am slightly confused as I walk up the hill to Racks Close, I can hear German 1930s music playing, I thought it was As You Like It tonight, not … END_OF_DOCUMENT_TOKEN_TO_BE_REPLACED

A couple of weeks ago I interviewed the creatives behind Chewboy Productions. As part of the interview, they were telling me about the new show they … END_OF_DOCUMENT_TOKEN_TO_BE_REPLACED