William J Dunleavy, author and star of this monologue play, is a writer and face to watch. He enters the room (as the staging is more geared towards feeling you’re in a room with Dunleavy than a theatre) with an initially unobtrusive sort of lowkey prowling that subtly starts to command the space until he’s conquered it. His gaze is not on the middle-distance; rather, he looks at each of us with eye contact held intensely -penetrating, flirtatious and bold before he speaks. Matt McGowan’s lighting design, in this simple above-a-pub theatre, is set to just the right level of crepuscular visibility for being lured into the mise-en-abyme disclosures of self-love, or maybe self-loathing, that so much watching reveals. Shimmering off Choy-Ping Clarke-Ng’s reflective set, like a Hockney swimming pool, co-directors Grace Morgan and Laoise Murray demonstrate careful consideration of ambience for the telling of the story of three beautiful youths’ exploration of visibility and oblivion. 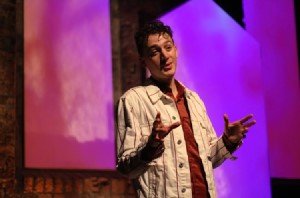 Dunleavy’s strong physical presence does somewhat switch gears as he settles in to tell us a story. Conspiratorial and droll, like a fireside chat with your dishy friend, the character speaks the author’s carefully constructed words with a degree of oration and a lot of analysis whilst also painting a picture. The beautiful and the damned is not a new subject, of course, and has been revisited time and time again. Sergio Blanco’s The Rage of Narcissus made its London debut almost exactly two years ago (just before the theatres were sent dark by the pandemic) and is also a monologue play set in a mirrored space. That one-man show, like this one, also offered a modern take on the same mythology and explores similar themes of how oneself and others can become transfixed by a mirage that is as much about manufactured self-identity as it is about ‘beauty’. Whereas Blanco’s work is intense with a throbbing mystery narrative, Dunleavy’s is mostly chatty, authorial and poetic. The playwright explained that he drew inspiration from the decadent world of Brent Easton Ellis as well as the pantheon of great Irish dramatists and it shows.

Unlike, Blanco’s work that has an intensely dramatic McGuffin at its heart or Joseph Charlton’s Anna X that explores the systemic self-regard and deceit of the age of Instagram, Dunleavy is in many ways telling a simpler coming-of-age story about sex, desirability, recognition and competition as experienced by young gay men as we approach the second quarter of the 21st century. He has not peppered his tale with endless selfies or messaging apps – there’s no need. Instead, he returns, rather star-stuck, to a refrain of, chasing a movie star who is featuring in a revival of Larry Kramer’s seminal 1985 A Normal Heart. These Gen-Zers consume the publicity but not the content with all the naïve self-centredness that every youngster ever has. And a big night out will not quite go as planned.

Dunleavy is captivating and his story mostly well-constructed, but in its chattiness and disclosure, it seems the script has retained a little too much of his world-building and character-finding writing that should have been edited out in its next draft. The monologue has many darlings that elicit laughs and are lyrically lovely but could do with a ruthless cull for dramatic economy. A story well told – as much as a play performed – has rising action, climax and falling action. Dunleavy’s tale does this with a quick reversal hinting towards the yet-to-be performed second and third parts of his work but is a little too front-loaded with sketches and meditations that, as interesting and beautiful as they are, obscure the plotting’s forward momentum. Nonetheless, as performance art resplendent with talent and some big ideas, Narcissus will speak to many and shows great promise for the young theatre company who created it.

A young man reflects on a has-been, would-be life, a never-ending party, all faded in the flash of a camera. A life so glamorous, so beautiful, he may well have dreamed it.

A monologue play about beauty, love, sex and fame that will leave you heart-stopped, heart-wrenched and heart-broken.

This work premiered at Dublin Fringe Festival. This production is supported by Culture Ireland.

If the audience were to be exposed to full versions of the seventy-four songs listed in the programme, it would be a very long show indeed. I suppose … END_OF_DOCUMENT_TOKEN_TO_BE_REPLACED

How can a play be both charming and devastating? Through its tight script, abundant humour and pitch-perfect performances, 4th Country manages to … END_OF_DOCUMENT_TOKEN_TO_BE_REPLACED

Britain, so a London cab driver once told me, is obsessed with the Second World War, as though it happened just recently. Power Luncheon would seem, … END_OF_DOCUMENT_TOKEN_TO_BE_REPLACED