When one thinks of environmental activists and conservationists, one might think of the crusader types like Extinction Rebellion who tie themselves to trains, suspending services and thus forcing passengers to, ahem, get in their cars to get around instead. Rachel Carson (1907-1964) was of a different era, however, and her writings were evidently well researched. Her ability to use words to persuade without being preachy has meant that her writings still resonate today. In this production, the narrative is beautiful and yet disturbing. 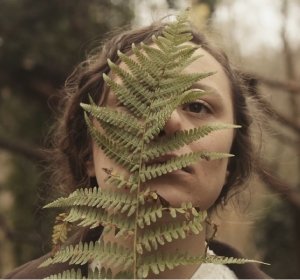 For a show about Carson, there isn’t a huge amount of personal detail beyond her environmental interests. There’s the ‘Googleable’ information, such as where she was born and where she died, and the various things occupations she took on during her working life. The focus is instead on what she thought of the great outdoors – everything from plant life on land to what could be lying on the ocean floor. The beauty that Carson appeared to find in nature is hugely appealing, even to a hardened city dweller like me that would (global pandemics aside) usually only admire the artificial greenery to be found on a theatre stage.

Katurah Morrish doesn’t so much play Carson as re-enact the thoughts spiralling through Carson’s highly inquisitive mind as she ponders on, for instance, how many species in the oceans there are that are still undiscovered. A thoughtful production, it’s also mercifully unpreachy. Rather than aggressively calling for an immediate and outright ban on dichlorodiphenyltrichloroethane (DDT to more simple minds like mine), she takes the approach of highlighting what indiscriminate use of it as an agricultural pesticide was doing to wildlife.

Some of her musings are the sort of questions one asks when putting the world to rights through conversation into the small hours. The bold descriptions of nature are accompanied with both still and moving images that are just as vivid. There’s an excellent use of colours throughout, climbing to almighty confrontations to visualise the worst-case scenarios portrayed by Carson that would have been realised if her words hadn’t been heeded by anybody.

The production also demonstrates Carson’s different writing styles – her 1951 book The Sea Around Us is often described as ‘poetic’ simply because that’s what it is, while her 1962 book Silent Spring was altogether more scientific in tone. Steadily paced (there’s always Hamilton for people who prefer dialogue at motorway speed), there’s nonetheless a pulsating energy about this incredibly compelling and accessible work.

Nevergreen is a short film about ground-breaking environmentalist Rachel Carson, the début project of performance collective the wonderful (@wethewonderful). The film was shot on location in Hampstead Heath in London across one weekend in the December Lockdown. We have tried to capture Carson’s spirit, incorporating sounds from nature, dance, music, poetry and animation to create her rich and inspiring world.

It’s a show of its time. Well, it isn’t really – it’s a show first produced in the 1950s, with this production placing the action in 1913. The set … END_OF_DOCUMENT_TOKEN_TO_BE_REPLACED

The whole narrative in Lift is almost totally implausible, at least to me, until the penny dropped about two-thirds of the way through. The central … END_OF_DOCUMENT_TOKEN_TO_BE_REPLACED

“Three Decembers is the finest modern opera that I have seen.” So wrote Chicago reviewer Tom Williams, having seen its premiere in 2008, and I can do … END_OF_DOCUMENT_TOKEN_TO_BE_REPLACED

There’s a surrealness to Mission that the production’s own script readily acknowledges, with more than one character admitting, separately, that they … END_OF_DOCUMENT_TOKEN_TO_BE_REPLACED

In June 1988, Bob Dylan set off on what has become known as “The Never-Ending Tour” and apart from a break due to the pandemic, it’s still going 34 … END_OF_DOCUMENT_TOKEN_TO_BE_REPLACED