With just one free evening to review Constellations, I was immediately faced with the impossible decision of which cast to watch out of a star-studded choice of four. In the end, I settled on Russell Tovey (Roland) and Omari Douglas (Emmanuel in this play, Marianne in other versions) for the simple reason that my friend had seen them live and loved it. I had thought, on starting out, that I may be able to squeeze a second cast in after the first, but as it turned out, watching the play once put me through the emotional wringer enough for one night. I will definitely be trying to watch another couple of casts before they go offline. 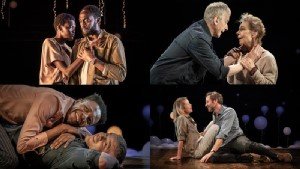 Constellations takes us through the lives of Roland and Emmanuel as they meet at a barbeque, move in together, break up and then find each other again ballroom dancing. From here their relationship blossoms until they are faced with some heart-breaking news.

As an astrophysicist, Emmanuel regular speaks about the concept of the multiverse and string theory. Whilst I didn’t quite understand the ins and outs, the basics seem to be that at any given point in time, there are multiple possible outcomes that could play out based on our decisions, and it is with this in mind that each scene is replayed several times in slightly different ways, demonstrating the multiverse for our couple. Whilst this was interesting and enjoyable at the start, there did come a point where it started wearing a little thin as the pace of the play slowed accordingly. These multiway scenes are also interspersed with scenes from the future being played out which also made it a little confusing to follow at first until I fully understood what was happening. I was hooked.

Omari Douglas is utterly compelling as Emmanuel, he is the fun, outgoing one who seems very in control of his fate, fully understanding the doors that each decision he makes can open and close. He drew my attention throughout. Russell Tovey on the other hand was more understated and potentially a little more of a cliché of a man who struggles with the idea of emotions. This, however, made it all the more impactful when he did shed a tear towards the end.

Overall, I would highly recommend an evening with Constellations. I can personally vouch for the cast I chose, but whichever cast you pick you are guaranteed a brilliant watch. Just make sure you have tissues at the ready.

A quantum physicist and a beekeeper meet at a barbeque. They hit it off, or perhaps they don’t. They go home together, or maybe they go their separate ways. In the multiverse, with every possible future ahead of them, a love of honey could make all the difference.

This summer Nick Payne’s beautiful and heartbreaking romance Constellations is revived in the West End with a twist: four different casts take turns to journey through the multiverse exploring the infinite possibilities of a relationship; each refracting the play afresh. Starring Sheila Atim and Ivanno Jeremiah, Peter Capaldi and Zoë Wanamaker, Omari Douglas and Russell Tovey, and Anna Maxwell Martin and Chris O’Dowd.

Britain, so a London cab driver once told me, is obsessed with the Second World War, as though it happened just recently. Power Luncheon would seem, … END_OF_DOCUMENT_TOKEN_TO_BE_REPLACED

William J Dunleavy, author and star of this monologue play, is a writer and face to watch. He enters the room (as the staging is more geared towards … END_OF_DOCUMENT_TOKEN_TO_BE_REPLACED

Cirque du Soleil’s Luzia is a joyful whirl through a psychedelic Mexico, which reminds us why live theatre is so special. Anyone who goes to … END_OF_DOCUMENT_TOKEN_TO_BE_REPLACED

I am always very excited to come across a new theatre, and Esher Theatre is a real ‘find’, conveniently situated near to Esher High Street and right … END_OF_DOCUMENT_TOKEN_TO_BE_REPLACED

Cecil Sharp is no unsung hero. Without the energy of this driven and at times prickly musician, the traditional folksong of rural England would very … END_OF_DOCUMENT_TOKEN_TO_BE_REPLACED