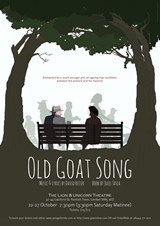 It’s always exciting seeing a musical for the first time, especially when it’s quite a new one. Will the songs have you singing and clapping along; will they be so memorable that you’ll be humming them for days?

In the case of Old Goat Song, the answer is no. However what the songs are is witty, warm and funny. The music is simple but the lyrics are clever and well delivered, meaning that the introduction of the songs never seems artificial or misplaced. All the cast have good voices and together with the electric piano accompaniment they manage to lift the roof of the little theatre without ever becoming deafening or raucous.

The story is as uncomplicated and gentle as the songs; the eponymous Old Goat lives with his nagging sister who confidently expects to inherit his considerable wealth upon his death. Unexpectedly, in his twilight years, he develops a strong attachment to a teenage waitress who reminds him of his long dead wife; this, of course, much to the horror of his sister, who accuses him of being in love with the girl, especially when he begins to buy her extravagant presents.

Shocked, he begins to question his own motives. Is she really the daughter he never had, as he keeps telling her, or does he in truth feel something deeper? The story switches from the present to the past and back again, always remaining clear and fluid. So far, so simple. The tone is light and unashamedly sentimental. There are no bitter undercurrents, no disturbing hints of sleaze. However it is saved from descending into two-dimensional schmaltz by the honest, believable drawing of the characters. The Goat, Bill Fast, is impetuous and doting but in no way stupid. His sister certainly wants his money, but in her own way she truly cares for him and wants to protect him. And gradually we discover that his relationship with his late wife, which he habitually views through a rose tinted bubble, was in fact very flawed, as indeed was his wife herself.

The story, therefore, while far from gripping, is a charming tale, and keeps us interested until the end. This is helped by the quality of the performances. Matthew Hendrickson is endearing and humorous as Bill Fast, and his domestic scenes with the rather wonderful Andrea Miller as his sister Cora will ring a comical bell with many people. Leigh Lothian switches effortlessly between the Young Danielle and Cara, becoming a different person with the flick of her ponytail.
Pippa Winslow had great presence as the Old Danielle, but while singing she looked a little manic, bulging eyes and desperate smile suggesting a need for Prozac rather than a restful afterlife. This wouldn’t have been a problem at all in a larger theatre, with some distance between her and the audience, but in the claustrophobic, 135 degree-view location of the Lion & Unicorn it was rather unnerving.

Old Goat Song is a lovely story, with funny songs, told by a talented and charming cast, and wisely it doesn’t try to be anything else.

This play was first put on at The Mill at Sonning in early 2010 - the world has, of course, changed significantly since then, and the script has been … END_OF_DOCUMENT_TOKEN_TO_BE_REPLACED

It’s easy to see why the Orange Tree has brought this one back for another run, less than a year after its first outing here. This is a bold, … END_OF_DOCUMENT_TOKEN_TO_BE_REPLACED

I always loved Choose Your Own Adventure books. Definitely not the Steve Jackson ones where you had to roll dice (who did that?) to find out whether … END_OF_DOCUMENT_TOKEN_TO_BE_REPLACED

Well, there’s a bit about Pablo Picasso’s (1881-1973) paintings in this show that bears his name. But it’s mostly about his approach towards women. … END_OF_DOCUMENT_TOKEN_TO_BE_REPLACED