Home » Reviews » On Monday Last Week at the Etcetera Theatre 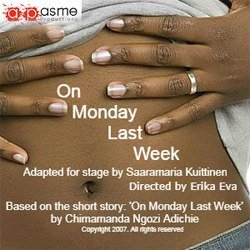 Life is full of differences. Hopes and dreams regularly turn out not to come true and perception can sometimes be completely different to reality. So it proves for the hero of Saaramaria Kuittinen’s one-act play On Monday Last Week at Camden’s Etcetera Theatre.

After six years of waiting, Kamara (Shireenah Ingram) has finally moved from Nigeria to the USA to be reunited with her husband Tobechi. Despite being vastly overqualified for the role, she takes a job as a nanny for Josh (Natalya Martin) a child of mixed parentage with a Jewish father, Neil (Stephen Bradley) and an African American mother, Tracy (Koral Neil). Everything seems to be good at last for Kamara but six years is a long time and her relationship with Tobechi is not turning out the way she expected it to. This could be because of the time spent apart and the fact that Kamara has had a long time alone where she has needed to look out for herself and be less reliant on her husband than would normally be the case. Whatever the reasons things are different and Kamara has begun to realise that her hopes and desires in the United States are definitely not the same as the ones she had sitting at home in Nigeria.

Based on a story by the acclaimed author Chimamanda Ngozi Adichie, On Monday Last Week tells a very personal story of one woman and her life as a new immigrant going to a country and culture totally different to her own. There are some lovely moments where Kamara speaks about the way that the Liberal Elite – personified in Neil – really know how to insult others in a wonderfully politically correct manner so that the person being insulted manages to feel guilty for being themselves. She also has the opportunity to comment on child-raising in the affluent West where you don’t have to worry about where the next meal is coming from but can instead respond to the latest parenting panic released by the media.

Shireenah Ingram is wonderful in the role of Kamara, with her intense stage presence and superb voice that could recite a telephone directory and make it sound fascinating. I have to say that had I been adapting the story, I would have made it a monologue piece fronted by a superb actor such as Shireenah. Part of the reason I say this is that, as the show is quite short, the other characters never really get established. Neil is a sort of politically correct Woody Allen character with a temper and a totally believable middle-class NIMBY attitude to everything and Stephen plays him well but, by the end, I was left wondering how he and his wife had ever got together let alone stayed a couple long enough to produce a child. This is not a fault of the actors but more the time their characters had to develop and get into the audience’s mind.

The production itself is nicely staged by Director Erika Eve who makes great use of some old packing cases and lighting to set both the scene and the atmosphere, and the use of the other three actors to simulate the absent Tobechi worked pretty well and gave someone for Kamara to interact with when those moments were necessary.

Overall, I quite liked On Monday Last Week. I think the shortness of the play led to some issues with character definition but, the main protagonist, Kamara was both beautifully written and performed and definitely made the production worth seeing.

Catch Me is a new musical written by Arnoud Breitbarth and Christian Czornyi and directed by Adam Lenson, that debuted in 2016 at the Arts Theatre in … END_OF_DOCUMENT_TOKEN_TO_BE_REPLACED

There are usually, broadly speaking, two large demographics of patrons at a family show like The Wizard of Oz – children and their responsible … END_OF_DOCUMENT_TOKEN_TO_BE_REPLACED

This production makes excellent use of the available stage space - and, rather like the big musicals at Chichester Festival Theatre, has its cast … END_OF_DOCUMENT_TOKEN_TO_BE_REPLACED

This is an enjoyable and dynamic production of Henry V at the Sam Wanamaker Playhouse. Does it matter that there is innovative action and that it is … END_OF_DOCUMENT_TOKEN_TO_BE_REPLACED