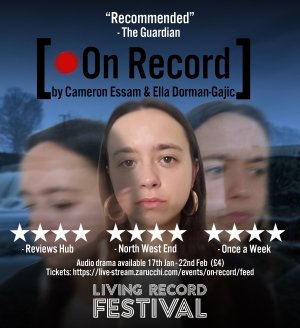 It was, I’ll admit, rather difficult to care very much about, for instance, what the writer (Tyler South) and the director (Cameron Essam) of a play within this play were discussing. One of them, perhaps both, has a degree: well, so do a lot of people these days. And if that wasn’t ground-breaking news, the audience also gets to find out precisely what sort of croissant someone is eating. Riveting, edge of seat stuff.

If you’re still reading this, Naomi (Jesse Bateson), an actor, is both brown-nosing and being brown-nosed by the play’s writer. With borderline absurd pleasantries and compliments being exchanged, I found myself wondering if an extra-marital affair was going to materialise. Fortunately or unfortunately, there is nothing of the sort. The play within a play is set at Berkshire Women’s Refuge (is there really only one women’s refuge centre in the whole of Berkshire?) and the central character, Mona (also Bateson), is trying to help Hannah (Ella Dorman-Gajic), who has come to the refuge because she requires emergency shelter.

Mona feels very guilty, thinking she did not do enough to assist a previous client, whose story hit the news headlines. Hannah, meanwhile, is unconvinced the police will offer any meaningful protection for her, based on previous experiences, and so Mona changes tactics, discussing a plan of action to get Hannah out of the house. But her abusive boyfriend Darren’s shift finished considerably earlier than expected, and she was effectively caught red-handed. A plot twist sees to it that the abuser gets his comeuppance, though what transpires raises questions about whether fire should be fought with fire.

The audience’s patience is somewhat rewarded in a riveting final scene. The sound levels could have been more balanced – I found myself having to crank the volume up considerably more than usual to hear what was being said at certain points. Mona, judging by how other actors in the play within the play react to her, is talented but nonetheless unpopular, though the reasons why are not explicitly explored in any great detail. In its current form, it is an audio play, but it would perhaps work better fully filmed, to gauge facial expressions and reactions to events in the storyline. At just thirty-five minutes long, it’s one of those shows that manages to be somewhat absurd and entirely believable at the same time.

On Record is an atmospheric audio drama delving into the inner-workings of one woman’s mind.
Mona’s job is to help women in need – so when a desperate stranger comes to her, she soon gets entangled in a testing dilemma. But is this story a little too familiar? As she travels deeper into a brutal world, not all could be as it seems… especially when the ones in power are listening in. A physiological thriller bordering on dystopian. Boldly exploring deception, memory and blame.

This piece was written and produced during COVID-19 pandemic. It was recorded remotely during the January lockdown. ​This is Ella Dorman-Gajic and Cameron Essam’s first audio drama together. It stars them alongside Jesse Bateson, Louise Cornelia, Tyler South and ​William Shackleton.