Four Edgar Allan Poe stories on the trot. This is nothing if not a macabrathon. It’s not just any old Poe either, but matter from the darkest reaches of an output never over-troubled by sunlight. 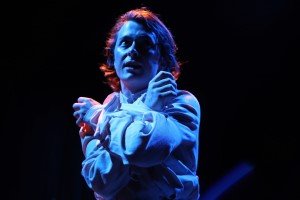 To stage such a show requires an appetite for horror almost as voracious as that of the tormented but prolific American author who died in 1849 at the age of forty. This is amply supplied by the young performer and director of One Man Poe, Stephen Smith.

From early childhood, he says, he has been fascinated by horror movies, not least those coming from Universal in the interwar years. He even borrowed his father’s video camera to create sequences that would “creep out” his family. On the evidence of his opening night, this apprenticeship has paid off.

I caught him at the start of his run – more a skip of two steps – at the Palace Theatre in Watford, a precursor to the London dates which form part of the city’s Horror Festival. Smith, who is 28, boasts a chilling skillset, taking him right through the range from gibbering jailbird to high-horse declaimer.

These dates were a home-town appearance as he grew up in Watford, and what the audience lacked in numbers it made up for in sympathetic suffering. First comes The Tell-Tale Heart, a murderer’s forensic account of his own crime, related in order to persuade himself that there is nothing wrong with his sanity, even though he is speaking from the fastness of a lunatic asylum.

Next up, or rather down, is The Pit and the Pendulum, made famous than many of the other tales through the ghoulish travesty of the 1961 Vincent Price film.

Then The Black Cat, dark as its title, about an alcoholic seeking redemption through a death-bed confession of his life’s excesses.

It’s a hell of an ask – of himself as much as of the audience. These pieces roll verbatim by like one dark freight wagon after another. Being a rendering of Poe, there is always the tendency for the light to lose out badly in any light-and-shade arrangement. Smith gets the problem, and fortunately lets his range admit the flicker, rare but essential, of outlandish melodrama, verging on farce, to leaven the peddling of serious terror.

Finally, with the mild relief of rhymed verse, comes The Raven, perhaps Poe’s closest equivalent to a hit single. Here a heartbroken lover appears to identify with the bird of the title, who repeatedly intones the single word “nevermore.” This is Smith’s, and Poe’s, best moment of the night, each capitalising on the musical energy of the form.

The programme is a driven and demanding project, in which the performer, like the author, is compelled to turn the emotional volume to the top of the dial and keep it there. Though you could never call it comfortable, the show should feel well at home in the dramatic nineteenth-century church masonry of The Space Theatre on the Isle of Dogs when it starts its five-night run there on October 19.

Renowned as the ‘Godfather of Gothic Horror’, Edgar Allan Poe was a pioneer in establishing the horror genre. Although his works are nearly 200 years old, Poe’s stories have stood the test of time and have inspired a countless number of horror writers.

Using Poe’s original text from the 1840s, one actor faithfully brings his words to life on stage, performing four of the most terrifying examples of gothic literature:

Act One:
The Tell-Tale Heart and The Pit and the Pendulum
– Interval –
Act Two:
The Black Cat and The Raven​

Dramaturgical Support:
Amber Buttery for The Tell-Tale Heart
Amy Roberts for The Pit and the Pendulum
Jonah York for The Black Cat
Rebecca Phythian for The Raven
Marketing Support:
Bethany Fox and Jack Hesketh

“Keep it shallow, keep it pretty, keep it moving,” declares Justin Vivian Bond, letting the audience determine for themselves what precisely is really … END_OF_DOCUMENT_TOKEN_TO_BE_REPLACED

This play didn’t do that well on Broadway the first time around in 1963, and did worse the second time around, even with a revised script, running in … END_OF_DOCUMENT_TOKEN_TO_BE_REPLACED

One of the very few good things about the COVID pandemic is that the opportunities to live stream theatre performances have increased exponentially, … END_OF_DOCUMENT_TOKEN_TO_BE_REPLACED

Exploring both the Jewish and Christian faiths, Candlesticks in some ways puts forward some good arguments for systems of belief that exist entirely … END_OF_DOCUMENT_TOKEN_TO_BE_REPLACED