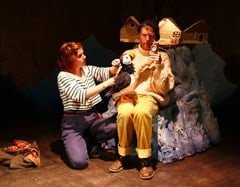 Are you ready says Adam Black, and the kiddies all shout out ‘yes’ and so the play begins. Much Ado About Nothing… hold on, it is Puffin, not Nothing – Much Ado About Puffin! Is this a different story to the one I know?

Well, this is a story about a lonely man on a stormy small island who collects weather data, who eventually makes friends with a bird, actually to be more specific, a puffin. There are very few words spoken in this production, in fact, I do not recall any words. Instead, there are puppets, music and symbols.

The cast consists of only two people who were very simply dressed. Adam Blake played the lonely man who battles through the winds and storms in his bobble hat, yellow trousers and brown coat. He does a lot of aaahhhhhh, ummmmm and makes various appropriate noises that capture the audience’s attention. Debbie Hard in her striped top represented the puffin by puppeteering. Both performers embraced their roles and played their parts very well. The audience was captivated.

The set is equally simplistic and after the show there was the opportunity for the children to take pictures, ask questions and explore the set. There were lots of inquisitive questions, some about what the sturdy looking islands were made of, how the puppets were manipulated, how the smoke came from the chimney of the miniature house and so went the questions.

The space was used very well, there was a suspended window, two islands and a few boards. But that was enough for the story-telling and when the play was being acted out, you didn’t notice the whole set, you ended up focusing on just a bit of the set.

As this story is told with the absence of words, the music is crucial and Sarah Moody has composed it very well, she got it absolutely spot on. I sat there with my five year old who cooed, swayed and hummed at the right moments, and then is stunned to see how Adam quickly grabs his coat up from the floor and it is instantaneously shaped to resemble a person. ‘Look Mama, he is dancing with his coat’, my little boy shouts out and then giggles away along with some other toddlers.

He may not have understood the symbolism of when the little dolls house opened that we were being transported inside the house, or the sign that represented days and nights, but he enjoyed the play and understood the main story. A lonely man on island who makes friends with a puffin.

Much Ado About Puffin
On a small island,
In the middle of the big sea,
A man meets a bird…

Join Open Attic as they traverse stormy seas and reckless tides to bring you this funny tale about a man all alone, a friendly puffin, and a whole lot of fuss over nothing.

Using skilful puppetry, beautiful music, and good old-fashioned storytelling, Much Ado About Puffin is about old habits, new friendships, and stepping out into the unknown!

Much Ado About Puffin Trailer from Adam DJ Laity on Vimeo.

Much Ado About Puffin is Open Attic’s first family show, it is recommended for children ages 4+ and their families. It is currently available for booking for rural and theatre venues for 2016/2017.