Opera Up Close must be praised for their commitment to out-of-work performers during the various lockdowns over the past year, especially with their series of ‘Coffee Break Concerts’. 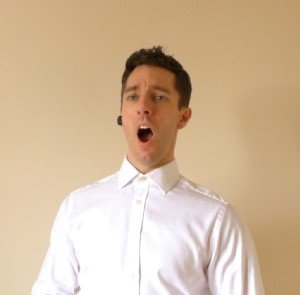 The most recent, Episode 10: Calming the Tempest, features tenor Joseph Doody, whose singing is the undoubted highlight of this concert. He sings the brief ‘Three Songs of Ariel’ that Guy Woolfenden wrote for a fabled RSC production in 1978. He demonstrates a superb technique, intelligently used: for example, his diminuendos on sustained notes in ‘Full Fathom Five’ are effortlessly yet beautifully managed, his diction is crystal clear and his singing throughout has a very high level of communication. This is a singer to be watched. Unfortunately, he is grossly underused, singing for less than five minutes of this thirty-five-minute concert.

The programme includes a world premiere: that of three songs to poems by Emily Dickinson composed by Nicholas O’Neill, which well repay repeated listening. They are charmingly sung by Flora Mcintosh, who, unfortunately, is poorly positioned camera-wise with a bright window behind her left shoulder so that the right side of her face appears to be in shadow. Fiona Shaw tells the story of how these songs came to be commissioned, and it is great to have the composer at the piano throughout the programme.

There is a preponderance of the spoken word in this ‘Coffee Break Concert’ – for example, Sylvia Plath’s ten-minute “The Bee Meeting” starts the proceedings. More music in the next concert please – and certainly more of Joseph Doody!

This Coffee Break Concert is available free of charge, though a donation is asked for! on the company’s website, as well as on YouTube.

OperaUpClose singers and instrumentalists present a series of cosy, casual concerts, from our homes to yours. Whether you are tapping away at a laptop at your kitchen table, juggling caring responsibilities, or looking for ways to stay happy and busy, we think you deserve a shot of coffee (or caffeine-free alternative) and great music.

There were moments in Two Billion Beats when one wonders if the youth of today really do talk in the way in which the script says they do. Do they … END_OF_DOCUMENT_TOKEN_TO_BE_REPLACED

I have spent much of the last thirteen months of Lockdown (it seems a great deal longer!) in trying to avoid ZOOM meetings, but Dr Will Houstoun’s The … END_OF_DOCUMENT_TOKEN_TO_BE_REPLACED

Diplomacy is better than brute force, though in Ali Stroker’s case it wasn’t so much consultation and dialogue that secured her roles across film, … END_OF_DOCUMENT_TOKEN_TO_BE_REPLACED

This was like an eighty-minute meeting that could have been an email. The only worthy bit of narrative was a few sentences, printed white text on a … END_OF_DOCUMENT_TOKEN_TO_BE_REPLACED