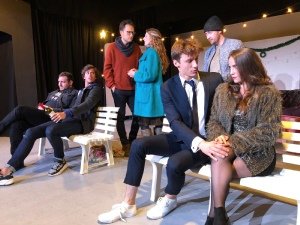 Imagine sitting in a village Community Centre with no stage, just a flat floor, no complex lighting rig, no set to speak of and no orchestra, just one piano, watching what quickly proved to be a totally involving and ultimately very moving production of Puccini’s La Boheme. That is what I had the good fortune to be doing thanks to Opera Holloway, a small-scale touring company that specialises in presenting accessible performances, particularly to new audiences and ‘to the doorstep of smaller communities’.

On this occasion, Puccini’s tear-jerker was set (director Fiona Williams) in a 21st century student flat at a south-east England fading seaside resort, and begins with Rodolpho (Alex Haigh, with some thrilling high notes) gazing “out into the smog over Worthing”.

He shares this accommodation with three other students including Marcello. In this role Sam Oram proved to have one of the richest baritone voices I have heard in a young singer – clearly someone to watch! Not only does he have a voice to die for, he is also a fine, very believable actor, especially in his scenes with his on/off girlfriend Musetta, (Lorena Paz Nieto) where there was real chemistry. She has that very rare stage quality: charisma, as well as another soaring voice, intelligently yet imaginatively used. Her portrayal of the role when she realised that Mimi is dying in Act 4 is so realistic, yet understated: beautiful!

The other students, Schaunard (Louis Hurst), and Colline (Matthew Thistleton) were also well sung and acted, demonstrating great rapport with each other and an understanding of Puccini’s intentions.

Mimi (Callie Gaston), Rudolpho’s fated lover had a powerful soprano but was hampered by an inappropriate costume – she looked more like a 1970s ‘hippy’.

Konrad Jaromin impressed in the roles of the students’ landlord, Benoit, a brief but notoriously difficult role to learn, and Musetta’s ‘toy boy’ Alcindoro.

The pianist at an electric keyboard was the indefatigable Laurie O’Brien (a medal due here surely!) and the performance conducted by an invisible Lewis Gaston. It was an unavoidable shame that, owing to the lack of any chorus, there had to be various cuts, noticeable mostly in Act Two.

La Boheme was sung in Italian with surtitles on a easily readable though never dominant screen. The unnamed provider of the surtitles deserves credit for providing not just a translation, but an at times amusing and always relevant English ‘version’.

Opera Holloway was founded in 2009 ‘in order to give young artists the opportunity to perform in opera at an early stage of their career’. It is clearly doing this very successfully and I can wholeheartedly recommend searching out a performance during the remainder of this year’s South London tour (Thames Ditton, Effingham, Epsom) or in 2020 when Carmen is being staged.

Puccini’s tragic story of doomed love among the impoverished young bohemians of late 19th century Paris is moved to a seaside town on the south coast of England, where four young men are living the youthful dream, yearning for love and not working too hard.

Their flat is run down, they’re content to live on take-aways, they complain when they run out of money and have perfected the art of dodging the landlord. Their lives are filled with trips to the pub, late night dancing and girls … until Mimi knocks on the door.

Rodolfo opens the door, eyes and hands meet and a passionate affair begins. The story follows the cash-strapped lovers as their relationship unfolds, from its joyous beginnings to the bitter end on a chilly promenade. This new contemporary production of Puccini’s thrilling, passionate love story captures the raw, consuming power of young love, performed in Opera Holloway’s intimate and immediate style.

English surtitles are provided. Running time is 2 hours which includes a 20 min interval.