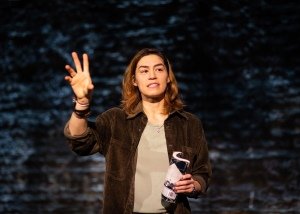 Wasn’t quite expecting a gentle and affectionate mash-up between Virginia Woolf’s Orlando and vegan sausage rolls but, hey, this is the Edinburgh Fringe where, in my experience, anything goes – the good the bad and the unusual. I’m pleased to report that Lucy Roslyn’s one-person eulogy falls into the first and third of those categories, an intriguing and entertaining exploration of both the book and what she calls  “the elephant in the room” which turns out to be Roslyn herself: she uses Orlando as a backdrop for a heartfelt and self-effacing homage to her own lost love.

Virginia Woolf is, of course, sacrosanct to some but – who’s afraid? Certainly not Roslyn whose mission is to get to the heart of Woolf’s novel-long unrequited-love letter to the erstwhile object of her affections – Vita Sackville-West – and apply it to her own experience – a process of enrichment that is fascinating and superbly observed. As a performer Roslyn combines panache, intimacy and a deeply affecting candour that draws the audience in and plays just a little bit of havoc with our emotions. And the writing is top drawer giving all the signs of being an impromptu chat with the audience which disguises the carefully crafted narrative.

Roslyn commands the stage and holds her audience: it’s amazing what you can do with a chair, the obligatory EdFringe black backdrop and a couple of angle-poise lights which, as well as illuminating Roslyn’s supra-expressive features as she manipulates them for effect, double as characters in the story or locations along the way. Not sure about techie demarcation lines but poor old Jamie Firth, Roslyn’s trusty LX guy, must wonder if he may be out of a job soon as the performer switches and wields her on-stage luminaires like iridescent marionettes. The lighting is appropriately subtle in such an intimate space and the sound is effective – so well done, Jamie – but get your cv ready (though, in fact, Frith is one half of BoonDog Theatre along with Roslyn).

There is an intelligent subtlety about the show which is down to Josh Roche’s direction who fully understands that he has a consummate actor on his hands who clearly knows her own mind (and script) and the direction she is moving in and where her ultimate destination is located. In recognising this Roche is able to ensure that Roslyn is let off the leash sufficiently so that her palpable inner-dynamism isn’t hindered but at the same time reels her back in to prevent her going completely AWOL. I’m thinking that it might have been fascinating to sit in on some of the rehearsal process.

Ultimately we have a self-penned acting masterclass here which is gripping and understated at the same time. That’s a difficult juggling act to pull off and I pay BoonDog Theatre the highest compliment if I say that I was absorbed and engaged and didn’t notice how uncomfortable the backless seats were until my hamstrings told me after the show had finished.

If you’re in Edinburgh do go and see Orlando if you can – at The Pleasance Cellar – (and, it has to be said, that the wonderfully vibrant Pleasance Courtyard serves the best Rosé in town).

BoonDog Theatre in association with Jessie Anand Productions
Have you ever yearned to leave behind those definitions handed down to you: loud or quiet, male or female, straight, gay, working/middle/upper class? Lucy Roslyn’s play is about a person looking to escape the identitarian bullshit of 2019 – just as Virginia Woolf imagined her own freedom in the pages of Orlando, a novel which strains at the borders of identity: are we any one thing? Or are our selves ‘stacked like dinner plates’ one on top of the other? Directed by JMK Award winner Josh Roche and following a sell-out run at VAULT Festival 2019.

Handel’s 1738 opera Serse (or Xerxes) is an exploration of power, love and human frailty. King Serse falls in love with the voice of his brother … END_OF_DOCUMENT_TOKEN_TO_BE_REPLACED

Lea Salonga has her fans. She also has some superfans, the ones who yell, “I love you Lea!” at almost every opportunity. If that wasn’t enough, there … END_OF_DOCUMENT_TOKEN_TO_BE_REPLACED

I have no hesitation in saying that the 1952 movie “Singin’ in the Rain” and its 1985 stage version is one of the greatest musicals of all time, … END_OF_DOCUMENT_TOKEN_TO_BE_REPLACED

There are, Maria Caruso was keen to emphasise in a post-show discussion, no wrong answers when it comes to responding to Metamorphosis or even … END_OF_DOCUMENT_TOKEN_TO_BE_REPLACED

Children of the Windrush generation, sisters Dawn and Marcia, grew up in the 1980s. In Roy Williams’ new play Dawn is shown struggling to care for … END_OF_DOCUMENT_TOKEN_TO_BE_REPLACED