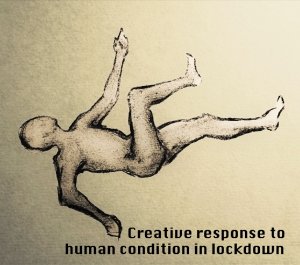 If it’s escapism from the lockdown environment you’re after, I would look elsewhere. While many people are, at the time of writing, patiently waiting for the day when theatres are up and running again, Out of Control considers the idea of embracing the lockdown lifestyle on a long-term basis, even considering it as the ‘new normal’, even if that term is not actually used in this series of monologues.

In the last episode (of six), ‘Continuers’, Mandy (Johny Gill) puts forward the advantages of sticking to the lockdown rules even after those rules no longer apply. One’s bank balance is healthier – working from home means no commuting costs, and only buying essentials such as food and medication means one isn’t wasting money on things one doesn’t need. There’s that new-fangled invention called the telephone that one could use to contact other people, thereby negating the need for physical meetups. And so on.

The dramatic effect of this last episode is maximised by the build-up provided in the previous five. The first, ‘Tara’, is laced with dark humour, but at least sees Tim (James Viller) decide on a change of vocation away from the online video content he currently churns out. I remain sceptical – Tim comes across as the sort of aspirational schoolboy who one day suddenly decides he wants to be an astronaut only to have a change of heart within the same week and dream of becoming Poet Laureate instead.

The absurdity continues in ‘Urban Foxes’, in which a Brighton-based young lady (Jessica Kinsey) begins a series of brief video clips by saying that life is hard on the streets, only for some of the subsequent footage to be filmed from within a furnished home. The camera angles vary, and the cinematography is highly authentic, giving the viewer a convincing experience of one of those people who regularly posts videos of themselves on social media telling their (not very substantial) audience what has been going on in their lives recently. She appears to have lost her wits completely by the end of the episode, but on the other hand, she may have lost them before the episode had even started.

Some more good camera work is evident in ‘Mangle’. An employee of a recycling plant (also Viller) is unhappy with his body and goes into considerable detail about what precisely he dislikes about it. I came away from this episode with more questions than answers. The most intriguing episodes for me were ‘Deux Femmes’ and ‘The Bus Ride’. In the former, a French lady (Laura Pujos) has joined the ‘gilets jaunes’ (that is, ‘yellow vests’) movement, with some details given about the cost of living and other reasons for aligning with protesters, such as parents she is aware of who go hungry so their children can have something to eat.

The latter is the most relatable to your reviewer, even if he doesn’t have quite the same level of trepidation as Laura Sophie Helbig’s character does with regard to taking a bus after months of not having been on one. (For some people, particularly those with limited mobility, bus rides in London have become more frequent in lockdown, because when exercising or grocery shopping, it is not possible to sit down for a while in a café, restaurant or shopping centre, so in order to rest their feet, they must board a bus.) For some viewers, her story may well be borderline melodramatic – after all, if one is really so nervous about being in an enclosed space with other people, then why do it at all?

It is not all doom and gloom, however, and it is interesting to note how some characters in this video series appear to have thrived in lockdown. An intriguing contribution to the conversations many of us are having about lifestyle changes both now and in the future.

‘Out of Control’ is a creative response to human condition in lockdown showcasing new writing and exploring the boundaries of theatre/film genre that emerged in lockdown.
It’s one year after the lockdown has been lifted, yet some people are “continuing the vibe” and remain… locked in. One such continuer documents his life online, spending his days revisiting stories people shared in the times of mandatory isolation. But is that enough to sustain his being?

..An influencer discovers his artistic calling.
..A politician faces her revolutionary past.
..A girl pursues friendship with a fox.
..A man entertains fantasies of mangling himself.
..A woman ventures to take a bus.
…And a modern cowboy watching them all.
Six identities screaming to be seen.
Six episodes exploring the need for others.

OUT OF CONTROL
Through a nation-wide callout featured on BBC Writersroom, six monologues were handpicked, giving voice to both established playwrights and debuting talent from all over UK.

Performed by Chalk Roots Theatre actors & actresses and their associates as well as featuring music composed by international artists from UK, USA, Germany, Russia, Tunisia, Croatia and Lithuania, ‘Out of Control’ explores the forms that theatre can take in current circumstances and what roles we play in each other’s lives.

This happens to be a timely production: employment has hit the headlines again at the time of writing, this time because of the concept of ‘quiet … END_OF_DOCUMENT_TOKEN_TO_BE_REPLACED

An opera (well, technically, an ‘opéra comique’, as there is spoken dialogue) in a relatively small space like the Charing Cross Theatre calls for … END_OF_DOCUMENT_TOKEN_TO_BE_REPLACED

Shoes, one would have thought, are fairly recession-proof. The problem for Charlie Price (Joel Harper-Jackson, reprising the role he previously played … END_OF_DOCUMENT_TOKEN_TO_BE_REPLACED

The descriptions of what happens in this show are so vivid that paradoxically they leave nothing to the imagination – and, at least at the performance … END_OF_DOCUMENT_TOKEN_TO_BE_REPLACED