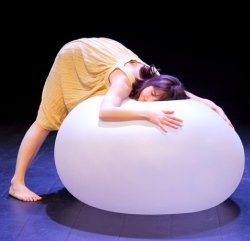 A single-performer show with no dialogue? Sounds like something like that odd show in the programme for the Edinburgh Festival Fringe called A Young Man Dressed as a Gorilla Dressed as an Old Man Sits Rocking in a Rocking Chair for 56 Minutes and Then Leaves, which, I’m told, is exactly what it says it is. Given the very young age profile of the target audience for Rise and Fall, it works rather successfully, and is even shorter than the other show I’ve just mentioned, coming in at just shy of 40 minutes. The key litmus test for me for a show like this is how many prepubescent children state loudly and categorically, without a scintilla of consideration for other children around them, that they are very bored: “Can we go home now?” Even that is not a failproof test, of course – a child could be tired, unwell or hungry, and it is too presumptuous to assume that just because someone
wants to go home that in all cases it is because they are not enjoying the show.

Still, nobody hollered that they would rather be watching CBeebies than wait to see how proceedings in this production would play out. There were, or so a younger member of the audience told me, 17 white balloons in the performance space, at least to start off with, with six additional balloons making an appearance in a later scene. What to do with all those balloons? I won’t list all the various uses, partly because I don’t have a photographic memory, and partly because there’s nothing to be gained by giving everything away.

But it’s all inventive and intriguing, whatever one’s station in life. A large white ball takes centre stage, and there’s much fun to be had with it. Unlike ‘the beautiful game’, performer Stefanie Sommer can simply go for it with ball skills – there are no rules and regulations to be (mis)interpreted by referees and disputed by commentators. Well, there’s the laws of physics and gravity. Or at least until she pulls out (spoiler alert) a balloon filled with helium. The resulting audience participation (target audience only!) is predictable but nonetheless a sight to behold.

Nobody taught Sommer’s character how balloons work, so she must go on a journey of self-discovery. And as at least one child pointed out, it’s a bit surprising that not a single balloon burst during the show. I suspect the loud noise created might be rather too frightening. The trial and error approach appealed to the inquisitive nature of children. Object permanence is explored creatively, using techniques not entirely dissimilar to ‘peek-a-boo’.

There are no projections, though the sound effects are good. Although it is a rather abstract story, its applications are wide. In collecting balloon after balloon, there comes a point at which something has to give, and it’s not easy to forget a lesson learned by way of making an innocent mistake. A fun and fascinating production.

This heart-warming original work, devised by Page One Theatre, is an interactive, immersive adventure for children aged 3 – 6.
Page One Theatre are excited to be touring their newest work, in and around London, in Autumn 2018 onwards.
In Rise and Fall, you’ll meet all manner of balloons from small floating moons to vast bouncing orbs. Forever expanding and contract, balloons are free to float, fly and away. Hold your breath and go sailing away.
Rise and Fall is a poetic and intriguing performance for young audiences about holding on and letting go.

I was quite excited to attend this festive sold-out production. Going into Fairytale of New York, I had little idea about what I would be watching. I … END_OF_DOCUMENT_TOKEN_TO_BE_REPLACED

The beautiful game. Or not so beautiful perhaps. Score a goal, win a cup, get the car and the house and the girl. Bask in the glory. Drink in the … END_OF_DOCUMENT_TOKEN_TO_BE_REPLACED

The title character in Kerry Jackson (Fay Ripley) is a paradox, at least on paper, a Leave voter who runs a Spanish restaurant and, as her chef Athena … END_OF_DOCUMENT_TOKEN_TO_BE_REPLACED