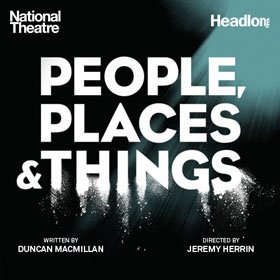 Plays that deal with mentality struggles, depression, addiction and similar seem to share a comparable tone in their productions. The majority use melancholy and conceding qualities in their characters to make them more relatable and sympathetic to an audience but these plays all seem to melt into one and it’s harder to see their differences. People, Places and Things may be considered to some “another play on addiction”, but its main theme shakes the theatre from the get-go. That theme is anger.

People, Places and Things gives us an outspoken, rude, self-loathing, self-involved, obnoxious and aggressive main character in denial, played by the phenomenal Denise Gough, which somehow brings the audience closer rather than pushing them back and in some cases, has them rooting for her. Denise’s character goes by many names: first Nina, then Emma and then Sarah – she struggles to deal with the reality or honesty of her situation. Gough’s character, an alcohol and drugs addict, fights against everything the rehab offers to her in a protest that it’s all a “farce” but still questions, what brought her to register herself to the facility in the first place. Gough’s character can’t seem to keep her story straight and throughout the play you start to presume everything she does as an act. Perhaps she can’t help herself anymore. Gough is an actress playing an actress playing an actress and it’s hard to turn your eyes away. It’s fascinating viewing.

The play showcases its high-point nearing the end of the first act where Gough has completely had it with the rehabilitation programme, its people and everything else. Her aggressive, condescending and violent tone rips through the auditorium and becomes something so uncomfortably real that, as an audience member, you are either completely fixated or need to leave the auditorium as you “cannot handle it” as I heard from a woman behind me.

Duncan Macmillan has created a fantastic play and a captivating main character (to which Gough adds even further brilliance to) that deserves all the praise that it’s getting. The therapy scenes are a little stretched out, however they bring Gough’s outbursts to even higher heights in comparison.

Maybe that’s the point. Jeremy Herrin’s direction is well thought out, keeping up with the fast pace and uncertainty of the plot and characters of the play. The creative highlight goes to Tom Gibbons whose petrifying sound design brings the chaos from Gough’s head straight to the audience and almost brings the roof of the Wyndham’s down with it.

This play does a lot for bringing the honesty of addiction to light and it does it unapologetically well. People, Places and Things transferred from the National’s Dorfman Theatre and now resides at the Wyndham’s until June 18th. With the on-stage seating, modern subject matter and 100 tickets for £15 every performance, there is no reason that this play shouldn’t appeal to a vast majority.

Everybody is going to get something out of this powerful play, even if it’s just a need for a stiff drink at the end.

People, Places and Things
Fresh from an acclaimed sold-out season in the Dorfman Theatre, this new production will transfer to the Wyndham’s Theatre for 12 weeks only from 15 March 2016.

An intoxicating new play about surviving the modern world. Written by Duncan Macmillan (1984) and directed by Jeremy Herrin (Wolf Hall).

Emma was having the time of her life. Now she’s in rehab.

Her first step is to admit that she has a problem. But the problem isn’t with Emma, it’s with everything else. She needs to tell the truth. But she’s smart enough to know that there’s no such thing.

When intoxication feels like the only way to survive the modern world, how can she ever sober up?

People, Places and Things is the latest collaboration between Headlong and the National, following the acclaimed Earthquakes in London and The Effect.

It wasn’t that long ago when anyone who gave warnings about Sleeping Beauty would be dismissed as more than a little ridiculous. The concern is that … END_OF_DOCUMENT_TOKEN_TO_BE_REPLACED

Alby hates themself, but can't work out why, and that irks them, even if they don't quite realise it. In this witty, occasionally unsubtle, but … END_OF_DOCUMENT_TOKEN_TO_BE_REPLACED

I have seen some outstanding acting recently at the intimate Finborough Theatre, and this new play is no exception. The highly talented cast quickly … END_OF_DOCUMENT_TOKEN_TO_BE_REPLACED

In the pandemic (remember that?) I worked in adult social care. My role was to help older people in their own homes with daily tasks - I’d cook meals, … END_OF_DOCUMENT_TOKEN_TO_BE_REPLACED