The intended infant audience for this show will be delighted. The much loved Peppa characters (sometimes operated by agile puppeteers accompanying them on stage) are not ornate but they are suitably distinctive and, though the sets might at first be thought by accompanying adults to be sparse with few accompanying high-tech effects, the familiar simplicity of these allows children in the audience to readily identify the key characteristics of characters and also give the necessary sense of their location. Importantly the character’s voices are the same, or at least believably similar, as on television. 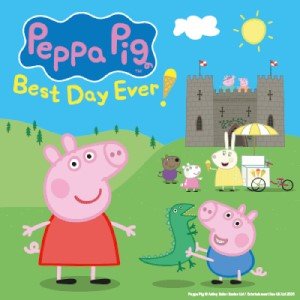 The first act starts off sparse and brightly lit, bringing to life a story episode the young audience will probably recognise even if some adults won’t. This moves on to a popular exploration scene with torches and another focused on the Bing Bong Song, which the tiny children in the audience all sing along with. They’re encouraged throughout by the pleasingly light-hearted host, Daisy, to join in and also to dance at their seats.

If a second parent thinks they might slope off at the interval to do a bit of shopping they might like to know almost everything that’s best about this show happens in the second act. This includes a delightful scene of food dancing across the stage as if by magic and also knights, a castle and a not-too-scary dragon. The theatrical fourth wall is also broken in a way that surprises and pleases everyone, especially the young. And by the end, even the most cynical adult will be glad they went to the show and stayed.

As the show ended, the borrowed 4-year-old I took demanded to see it again straight away before hopping happily out of the theatre sated with ice cream and holding aloft a rainbow light-up-whirly Peppa wand. (Yes, there’s merchandise to buy or avoid).

This is a very happy show for the small ones, even if they have forsaken Peppa on TV for other shows. Children more than 7 years old may not be so enchanted.

Peppa Pig is excited to be going on a special day out with George, Mummy Pig and Daddy Pig – it’s going to be her best day ever!

Get ready for a road-trip full of fun adventures. From castles to caves, dragons to dinosaurs and ice-creams to muddy puddles – there is something for all of the family and their friends to enjoy, including Miss Rabbit, Mr Bull, Suzy Sheep, Gerald Giraffe and more!

Prepare for the brand new Peppa Pig live show packed full of songs, games and laughter, it really is the best day ever for Peppa Pig fans!

Titus Andronicus is not usually a comedy, it is usually a bloody, villainous and vengeful tale, but tonight it is a comedy and a rather amusing one at … END_OF_DOCUMENT_TOKEN_TO_BE_REPLACED

This show is not without clichés - there are three of note in this production. Firstly, the French horn of the show’s title is personified, speaking … END_OF_DOCUMENT_TOKEN_TO_BE_REPLACED

There’s very little in the way of set in this show: aside from chairs, a few crash barriers and at one point, a red carpet, the actors’ movements … END_OF_DOCUMENT_TOKEN_TO_BE_REPLACED

South African born, but raised on the Isle of Man, Pierre Novellie is a true raconteur rather than just another 'stand-up' comedian. He says about his … END_OF_DOCUMENT_TOKEN_TO_BE_REPLACED

This show, Willy Hudson began by saying, is about himself. It is written by himself, is directed by himself and executive produced by himself. Almost … END_OF_DOCUMENT_TOKEN_TO_BE_REPLACED