It’s not that unusual, in the grand scheme of things, to have ambitions and aspirations – the pursuit of the American Dream, for instance, is more often than not seen as admirable, though of course there will always be cynics of everything. The sort of fantasies that Eva (Martina McCormack) has, however, are sometimes bizarre and overwhelmingly negative, drawing conclusions not so much on flimsy evidence but on no evidence at all. David (Eoin O’Sullivan), at thirty-six, still lives at home with ‘Mammy’, but the usual economic and social benefits and drawbacks to this arrangement almost become secondary concerns when there are other matters at stake. 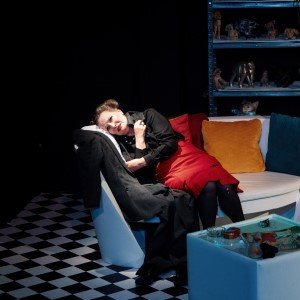 Eva’s bizarre behaviour seems to have rubbed off on her son, who still isn’t sure how to handle her erratic mood swings, as she goes from being borderline worshipful of David to being unjustifiably critical of him. She almost always is distressed about something or other, or claims to be, but as the narrative unravels, it becomes clear that not everything is as it seems. A family photo album, for instance, for reasons explained in the dialogue, doesn’t have any actual family photos in it. Dawn (Kate Conboy-Fischer), a former colleague of David, comes round to the house, is given short shrift by Eva, and is not seen again, though it is David that bears the brunt of Eva’s wrath.

Despite admitting a need to get away from an evidently toxic environment, David can’t act on his wishes, and even after an intervention from new lover Ruth (Tzarini Meyler), he doesn’t see an irreversible set of actions as freedom from tyranny. One wonders, to be fair, whether the answer to violence is more violence, even if justifiable, which makes the show not only uncomfortable viewing but also complicated. Eva’s conduct, for example, is rather easier to get one’s head around once her backstory is made clear.

The quality of filming in this online production is very high, with the action set entirely in the front room of Eva and David’s house. In the recollection of past times, Eva puts on costumes and mimes along to music and dialogue from previous records and films, lost in her own world. Perhaps it is just her way of indulging in escapism. It is an unusual narrative, even if not unprecedented, looking at the consequences of a man suffering from the effects of abuse rather than perpetrating it.

A compelling watch, the play has much to say about what goes on behind closed doors. Outward appearances can indeed be deceiving.

LipZinc Theatre (Ireland)
Open the door to No 19, where love hits the rocks like gin and tonic… In Eva’s world, time has eclipsed. Control is her vice and to be forgotten is her greatest fear. Meet David, her forever child. All he wants is to meet a nice lady and start a life of his own. But will Mammy ever let him go? Pheromone spits fire, glamour, and the wrath of God into 1950s Ireland.

Britain, so a London cab driver once told me, is obsessed with the Second World War, as though it happened just recently. Power Luncheon would seem, … END_OF_DOCUMENT_TOKEN_TO_BE_REPLACED

William J Dunleavy, author and star of this monologue play, is a writer and face to watch. He enters the room (as the staging is more geared towards … END_OF_DOCUMENT_TOKEN_TO_BE_REPLACED

Cirque du Soleil’s Luzia is a joyful whirl through a psychedelic Mexico, which reminds us why live theatre is so special. Anyone who goes to … END_OF_DOCUMENT_TOKEN_TO_BE_REPLACED

I am always very excited to come across a new theatre, and Esher Theatre is a real ‘find’, conveniently situated near to Esher High Street and right … END_OF_DOCUMENT_TOKEN_TO_BE_REPLACED

Cecil Sharp is no unsung hero. Without the energy of this driven and at times prickly musician, the traditional folksong of rural England would very … END_OF_DOCUMENT_TOKEN_TO_BE_REPLACED