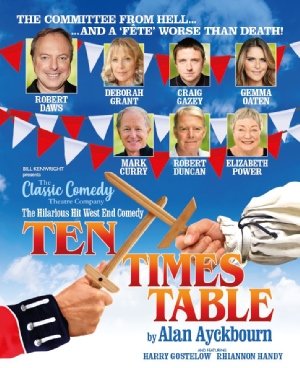 Ten Times Table (1977) is a comedy about people who like being on committees. It arose when Ayckbourn had to relocate his theatre in Scarborough from the library to new premises. This involved spending many hours in meetings. He became fascinated with the personality types to be found there and in particular how they used the procedures and protocols to get what they wanted. He brings all his comic genius and technical wizardry to turn this situation into yet another of his hit plays. He has now written over 80. Famously when it opened in London in 1978 a cleaner remarked: “The trouble with this play is that it starts out as comedy and ends up as farce”. Ayckbourn himself said of Ten Times Table: “The play could be described as a predominantly sedentary farce with faintly allegorical overtones. In more innocent days, it would probably have been subtitled a romp.” Those allegorical overtones are a nod to the political polarisation of the 1970s between the unions and the far left on one side and the Law “N” Order right on the other. These have uncanny echoes for us today. A timely revival.

The quality of this production is impressive. The director Robin Herford joined Ayckbourn at Scarborough back in 1976 as an actor. He has appeared in more original productions of more Ayckbourn plays than any other actor. Moreover he worked with Ayckbourn as a director at Scarborough. His designer Michael Holt has a forty year association with Ayckbourn. So these two are the A Team when it comes to putting on Ayckbourn. The casting is spot on. The set catches every telling detail of the awful ballroom at the faded Swan Hotel. The lights don’t work, constant banging and hammering, heating on the blink. A metaphor for England. Think Fawlty Towers minus Basil. The title refers not to learning ones times tables but as a compressed alliteration for the work of a committee. Ten people sit around a table many times. The play shows four such meetings. These are ostensibly to plan a pageant (or Rally according to Eric ) for the town based on an event from the town’s history. The Massacre of the Pendon 12. This quickly descends into all out class warfare between the champion of the people Eric, a Marxist and Helen (Deborah Grant, terrific) a leader of the toffs and a proto Mrs Thatcher. Coats catch their confrontation in a wonderful way: Eric in duffle coat and Helen in fur. Standing between the two factions is Ray the chairman of the committee. Ray is clearly Ayckbourn’s hero. Crouching in the middle praying not to be hit by a stray bullet.

The play then works on two levels. As a study in political polarisation. Think Remain versus Leave. Here the continuities from the 1970s are strikingly familiar. The rhetoric is unchanged. Harry Gostelow is superb as the militaristic Tim. A cross between Jacob Rees Mogg and Nigel Farage he is a comic gem. The times cry out for such men the play suggests. The other level the play operates on is the psychological. What one might call committee – it is. Mark Curry is terrific as Councillor Donald Evans a committee man par excellence. He serves on several committees and so knows every trick in the book. Indeed he uses his attendance on committees to leverage his appointment to yet more committees. He is punctilious and pedantic to a fault. Indeed finding fault is his raison d’etre. Spelling mistakes, grammatical errors, how to elect a chair, arranging the date of the next meeting he doesn’t let up. As if that were not enough he brings his 80-year-old mother Audrey (Elizabeth Power is superb) with him to the meetings. Robert Daws gives an outstanding performance as Ray the chairman trying to keep his head whilst all around are losing theirs. Ten Times Table does for the world of the committee what Noises Off does for the theatre.

Ten Times Table combines Ayckbourn’s familiar suburban comedy with political satire to create a wonderfully entertaining show. If you don’t know his work this is the perfect introduction. If you do then you will want to see this production as it top notch. Ten Times Table is worth seeing at least twice.

In the long-since ‘grand’ ballroom of the local Swan Hotel, a most miscellaneous assemblage gathers to conduct the business of the Pendon Folk Festival, led by excitable chairman Ray. Unfortunately, for Ray, his calamitous committee quickly divides, as his wife Helen has a bone to pick…

Add a Marxist schoolteacher, a military dog-breeder and an octogenarian secretary, and the table is set for one of comedy master Ayckbourn’s most hilarious plays. This tumultuous comedy by committee is not to be missed.

Ten Times Table, written by multi-award-winning writer Alan Ayckbourn, will embark on a nationwide tour stopping at Richmond Theatre from 20 – 25 January 2020. Ten Times Table is the inaugural production of The Classic Comedy Theatre Company, produced by Bill Kenwright and his team behind The Agatha Christie, The Classic Thriller and The Classic Screen To Stage theatre companies. Between them, these companies have enjoyed over 15 years of theatrical success across the UK.

The star cast is led by TV and stage actor Robert Daws, who is most loved for his role as Dr. Gordon Ormerod in The Royal as well as his time in other hit shows such as Poldark, Outside Edge and Roger Roger. Joining him is Deborah Grant, best known for playing Wendy in Not Going Out and Deborah Bergerac in Bergerac. Emmerdale and Holby City star Gemma Oaten is joined by Robert Duncan of Drop The Dead Donkey fame and theatre veteran Mark Curry, well known for his appearances in Hollyoaks and as Kevin in Last Of The Summer Wine. Craig Gazey, famous for his portrayal of Graeme Proctor in Coronation Street completes the cast, alongside Elizabeth Power known for playing Christine Hewitt in EastEnders.

The production is directed by Robin Herford known for his work on the West End hit The Woman In Black, with lighting design by Jason Taylor and sound by Dan Samson. Set and costume design is by Michael Holt.