Home » Reviews » Ares: one of the highlights of this year’s Vault Festival 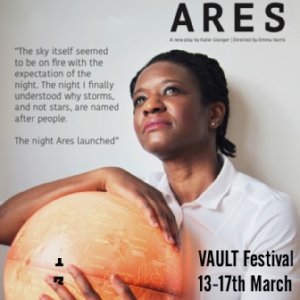 Do you know who Ada Lovelace or Charles Babbage are? The chances are that you will say no to the first and yes to the second name. Well, back in the 19th Century, Ada Lovelace carried out pioneering computing work on the Analytical Engine with Charles Babbage. Ada is one of the great unsung heroines of science whose works are only known by the men they collaborated with. Of course, that was the 19th Century and things are so much different today aren’t they? Unfortunately not. Historically the STEM (science, technology, engineering and mathematics) specialisations have always been perceived as the purview of men. This is one of the themes running through Katie Granger’s play Ares being performed during the final week of the Vault Festival in Waterloo.

This one-woman show tells the story of Alice (Andrea Hall) a young lady who has moved from a humble farm – where she was brought up by her father after her mother abandoned the family – through to becoming an astrophysicist working at NASA who has been picked to lead the first – and I’m loathe to use the word – manned mission to Mars. This is a dangerous and lengthy mission, with no real guarantee of a safe return to Earth. One of Alice’s first jobs is to decide on her crew and the first person offered to her is her own husband Dan. Knowing the risks, what does Alice do and what repercussions will follow whichever decision she makes?

Ares is a truly wonderful one-act play. Alice talks and has an amazing story that covers her early life through to today and looking to the future. She is a talented scientist who has had to put up with a lot – including being mistaken for the cleaner at one point – in her career moving from the farm to having another planet set firmly in her sites. But she is never boastful and displays great humility in relating her life and thoughts. Andrea Hall’s performance under director Emma Jude Harris is measured and engaging drawing the audience into the world of this young lady who has overcome so much to achieve greatness in an area where the playing field is anything but level. The writing is first rate and the narrative itself is very surprising in the way it pans out. Whilst I was expecting it to go one way, instead Alice’s story went down a completely different route, completely taking me by surprise and making what had started out as a great science fiction story – gotta love a trip to Mars – into something amazingly human and emotional – especially with the gentle edition of Heather Pasfield’s video design – which includes images of Alice’s husband Dan, played by Ryan Dooey.

Overall, I have to say that, yet again, I have had a welcome surprise at the Vault Festival with Ares. The play is beautifully written and performed, is utterly gripping from start to finish and even taught me some science – for instance, the North Star isn’t. Overall, an excellent production of a first-rate play that for me, is definitely one of the highlights of this year’s Vault Festival.

From Texas to Harvard to NASA, Alice is no stranger to conflict. As a woman in a male-dominated industry, she is used to fighting to get what she deserves. But when she has to decide whether to send her astronaut husband on a dangerous mission, knowing that he may never return, she faces the biggest quandary of her life.
“The sky itself seemed to be on fire with the expectation of the night. The night I finally understood why storms, and not stars, are named after people”

Ares is a one-woman future drama about outer space, identity, personal grief and Alice – the astrophysicist heading the first manned mission to Mars.

Ares is the first full-length play by stage and screenwriter Katie Granger. It has been a long term collaboration with actor Andrea Hall and director Emma Harris, in combination with creative producer Jessy Parker Humphreys.